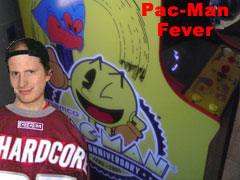 Ever since I was young, what I wanted more than anything else was my own arcade machine. I don't know why. Maybe it was just because of the novelty value. However, back then brand new arcade machines cost in the range of $3,000. That didn't include the price of having it crated, shipped, delivered, and set up in my home.

Today, arcades are a dying breed. With the possible exception of "supercades," dining and gaming facilities such as Dave and Busters, Gameworks, and the ESPN Zone, the old arcades that we knew and loved are few and far between. The ones that still exist, however, are mostly filled with antiquated games that are on the verge of a permanent "out of order."

Thankfully though, retrogaming is still quite popular. With classic gaming events such as the CGE and the newly named VGXpo (formerly known as PhillyClassic), gamers can experience classic arcade games the way they were meant to be played, presented by distributors who are dedicated to arcade restoration. But still, I wanted my own arcade machine to show off at home.

Actually I should go back in time a bit, and the story involves a mobile phone provider named Sprint. I have been a Sprint PCS customer since 2001, and I have been very happy with their service. Starting off with their unlimited PCS to PCS service (which helps out when you call your girlfriend all the time), it then added with their PCS Vision service, and then their deal with Namco to create accurate recreations of their best classics (Pac Man, Ms. Pac Man, Galaga, etc.) brought them to the front of the industry.

Starting last year, Sprint invited me to their Wireless Showcase, which takes place at E3. It is during this event that I get to check out the latest wireless titles from developers such as Jamdat, Mforma, I-Play, Gameloft, M7 Networks, and of course, Namco. The reward for attending this showcase: a brand new PCS phone preloaded with games and applications. One game is used for a tournament.

Last year, the game Puzzle Bobble was used for a chance to win a Space Invaders arcade machine. Since I am terrible at Puzzle Bobble, I passed. But this year it was a different story. Galaga was used for the tournament, and the grand prize was a limited edition 25th Anniversary Pac-Man machine, which also included Ms. Pac-Man and obviously Galaga.

To make a long story short, I ended up with the highest score, and two weeks later, Sprint gave me the good news. With victory in hand, I had a dilemma. Would the machine be able to fit in my apartment? If not, where would I store it until I can sell it for a nice little profit? Lucky for me, the machine I won is what is called a "cabaret model," a smaller design which became a perfect fit in my living room/rec room.

In the end, I decided to keep the machine. I play it on occasion, but in the end, I'm using it more as a display piece, keeping it in as mint a condition as I can. Since it is a limited edition, I know it will make a wonderful collector's item a few years from now.

As for Sprint, I know I told you guys this before, and I'm going to tell you again. I'm already happy with your service. You do not need to spoil me with free cell phones, nor a brand new arcade machine. Then again, who am I kidding? Keep giving me the goods!