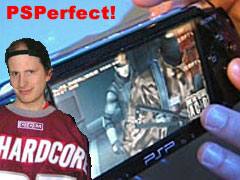 If anyone was wondering why I didn't provide a commentary last week, it was because I wanted to wait until I saw if the PSP would be the Game Boy's true competition. For a while I was wondering if there would be anything that would surpass the unstoppable Nintendo Game Boy and its offspring, most recently the Nintendo DS.

Maybe I shouldn't really include the DS because, despite being able to play Game Boy Advance titles, the DS is too different from any other Nintendo portable. I was starting to get tired of the Game Boy lineup and the numerous Pokemon titles that were being shot out anyway. Granted I liked the number of SNES remakes on the GB Advance, but still I wanted something new, and not even the unique features of the DS impressed me.

When I heard that Sony will be releasing their own handheld, the PSP, it caught my eye. The design was sleek, nothing like the boxy shape of Nintendo's last two handhelds (GBA SP and DS), and had a large widescreen display that rivaled even the Tapwave Zodiac. It got to the point that I did something that I never thought I would ever do: preorder one.

As many people know I have a divine hatred of pre-ordering. In the past, whenever I ordered something, I knew that it would not arrive on the day it was supposed to. I remember all the excuses that the incompetent retailers would say. "Today's actually the day it's being shipped (despite the ad saying ‘In Stores on 3-24-05.')" "It was lost in transit." Or my personal favorite, "It is currently being held by airport security." I'll still never forgive retailers for that big lie.

And then of course, there's the gimmick that retailers love more than anything: the dreaded bundle. Both Gamestop and EB Games, on their websites, are forcing customers to pay a minimum of $400 to get a PSP with titles and accessories they do not want. To me, this is an unfair business practice. Surprisingly, Best Buy, another retailer I have problems with (mostly because of their intrusive staff), were offering the PSP by itself.

Sorry Gamestop and EB, but the supposed PSP Value Pack (retailed at $249) is to consist of only the PSP, an AC Adapter, a 32MB Memory Stick Pro DUO, headphones with an attachable remote control, a cleaning cloth, a soft case, and two UMD discs (a video sampler and the full length feature Spider Man 2). Now I must mention something here: THIS IS NOT A BUNDLE!

When I got my Tapwave Zodiac at E3 last year, it had virtually the same equipment, but Tapwave, God bless their soul, did not force me to purchase any more titles from them. Sony is not doing that either, but in a reply email I got from EB Games regarding the bundling situation, they said that Sony is having them bundle the PSP with several titles.

What a liar EB Games is!

All EB is doing is forcing people to pay more for extra junk. As I said, what EB and Gamestop are doing is an unfair business practice, and if only it could be addressed to the Federal Trade Commission so we can make retailers offer the single unit as an option, they might take notice.

Retailers can also be labeled as lazy in my opinion. I don't see how when Halo 2 came out last year, stores including Best Buy (where I bought my copy), would offer the game at midnight, but not the PSP. The only places I knew that offered the PSP at midnight last night was New York's Sony store, San Francisco's Metreon and of all the stores I checked in the DC area last night, only Gamestop/Software Etc were doing it. Everyone else had to wait until 8am at the minimum.

As for the Metreon showing, Gamespot did a live video feed from the launch party, and if I wasn't embarrassed by their staff in the past (especially after seeing Jeff Gerstmann giving one 6.2 way too many), the way the crowd and staff were acting was so juvenile, it made me embarrassed to be part of this industry. I'm surprised that when midnight hit, we didn't have a reenactment of the infamous Paris riots during the PS2 launch (people were actually being crushed by the crowd).

Lucky for me, I decided to hold off until the next morning to pick up my PSP, and with it, a copy of Ridge Racer, a 256MB Memory Stick Pro DUO, and a USB data cable to transfer my music/video files.

Initial impressions were of complete awe.

As I said before the unit is sleek, the video quality is razor sharp, and the controls feel smooth as well. I agree that the analog nub takes a little getting used to but it's nowhere near as bad as everyone says it is. After the initial game test, I decided to transfer some music files, which was done in the same way I transferred them on my Tapwave, except instead of using a card reader, the PSP plugged into a USB drive that doubles as a card reader. Video clip transfer was more difficult, as I had to use another program to convert the file, then transfer it to the PSP, and lastly rename the file into a compatible formula. Fortunately the original name of the video file was left intact, so there was no guessing game in what I installed.

As I get more time with the PSP I will be able to truly test out the battery life, as while writing this, I have the Spider Man 2 UMD running under AC power. Eventually I will get to a full review of the PSP as well as some of the launch titles (depending on what we receive.) Sony Online has sent Untold Legends, which looks awesome, and Metal Gear AC!D is also on its way. Both titles should show exactly what the PSP can do.

MOST WANTED: For E3 to get here sooner so I can see the PSP lineup