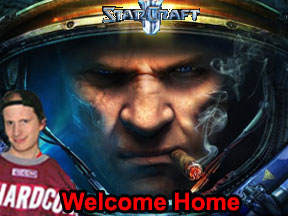 I’ve waited 12 years for this day to come. Yes, that’s the same 12 years I waited for Duke Nukem Forever to come out. Oh wait a minute. It didn’t come out, thanks to George Brussard’s laziness, added on by tweeting on where his pizza is and when his satellite television would be fixed, and the entire 3D Realms staff being let go.

But this twelve year wait actually ended on a high note. Yes, it is true. Starcraft II is now out for retail!

Remember I was a huge fan of the original Starcraft. Sure I was nowhere near the insane level of fandom you see in South Korea, but I was a fan nonetheless. I enjoyed the past Warcraft strategy games, and the change to a sci-fi setting hooked me right away. Not to mention the soundtrack, which I’m listening to right now as I pen my column. Terran 3 is on my list of the best game soundtrack songs of all time.

When Starcraft came out in 1998, it was a nonstop session on my PC, and in fact it was my pick for our first ever Game of the Year, but of course it went to a poorly animated side scroller called Heart of Darkness, a travesty that I still complain about to this day! Even more than Mario Galaxy 1 not being nominated for Best Wii Game a few years back.

But over the years, my interest in PC gaming took a huge fall from grace. The financial constraints of having to upgrade my computer non-stop was too much to bear, and then there were nightmares of DRM, SecuROM, and all the other forms of copy protection that hurt legitimate buyers rather than pirates. All of which led me to the promised land of consoles.

Even the announcement of Starcraft II back in 2007 wasn’t enough to bring me back. I knew it was going to be a while before the game was released. Bear in mind that this is Blizzard we are dealing with, and they are NOTORIOUS for their long development times. I always criticize these times because it ends up going to the point of a game’s system requirements being out of my league and I’d have to upgrade, or God help me, buy a new computer just to play it.

Then earlier this week I get an email from chief editor John, asking if I had an interest in reviewing Starcraft II. My first reaction was sheer joy, until I read about the fact that it can only be installed once. Upon hearing that, fears of SecuROM started to take over and with the high system requirements, more fear that our copy of Starcraft II would end up being just a coaster.

But then I read more, stating that the game’s DRM requires that the game be connected to the internet at all times, and that the CD-Key can only be linked to one Battle.Net account. I thought that’s not as bad because if it doesn’t work on my MacBook, I can try it on another PC.
*Commentator’s note. Very smart move, Blizzard, to make the game playable on Windows AND Intel based Mac systems on the same disc.

So I get the game late Wednesday night, create a new Battle.net account, and am ready to install the game from disc. Or at least I thought that’s how I’d install the game. Instead I find out the installer file had to be downloaded from Battle.net: a near 7 GB file that took almost all night to download on their slow servers!

At 9 am the next morning, the download is finally complete and I am able to install Starcraft II, which does a nice little tribute to Red Alert 2 by providing the back story while it installs. After it’s done, I’m ready to play, right?
Cue Lex Luthor again….WROOOOOOOOOOOOOOOONG!

A patch file needs to be downloaded, but thank goodness it’s only a 40 MB file which takes a few minutes, and then after all this time I am FINALLY able to play Starcraft II.

The game finally starts, and my first surprise is how I didn’t even need to have the DVD in my MacBook to play it. Even more, I was surprised the game actually ran well so far, but I was only able to play a few missions. I was far too tired at that point.

But from what I’ve seen so far, everything that I enjoyed about the first Starcraft hasn’t changed, it just looks a lot better, even with me having to play the game In low detail due to my low level graphics card. Darn GeForce 9400M!

Eventually I will be writing a review for Starcraft II once I get more time in it, but from what I’ve seen so far I can say that Blizzard as usual has brought out their A game and given me the Starcrat sequel I’ve waited so long to play.
Even going as far as recreating the Last Stand style Mission 3, a personal favorite!

One thought on “Return To The PC (errr, Mac)”