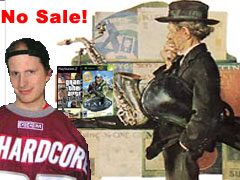 One of the most common complaints I and others have about the industry is the unprofessional attitudes of some sales associates at games and electronic stores. No matter where I go, these immature, inexperienced, and just darn incompetent fools have no clue how to do their jobs.

Look at how many times I try to go to electronic stores, attempting to get more information about up and coming products. Although I have a strong field of experience in the field, those nosy Worst Buy blue shirts have to hover over me and bug me for a sale, just so they can get a bonus off me if I buy an item with their service plans.

It has come to the point that when I see a blue shirt I have to stick my hand out and just say "LOOKING!" It has become my way of saying "Listen, I have much more experience that you will ever get working your minimum wage job. I am aware of what I am looking for and don't need your help, so bug off."

The same can be said to software store retailers, but in some cases, it is much worse. In the past, my biggest problem with said sales associates is how they always lie about the date a game is to come out. Their biggest excuse is that it is the "shipping date," but I don't buy that because stores that sell other forms of entertainment (i.e. Suncoast), have their products on the day they are to be released, NOT the day after. And when these software dealerships are to have the game on the day it's supposed to come out, sales associates will come up with more excuses as to why they are not selling a new product. It might be the old "FedEx lost the shipment" excuse or my personal favorite, "the shipment is being held up by airport security, and it will be here at 9pm."

And this is after they call customers telling them that their game will be available after 5pm!

But these lies are nothing compared to what I have dealt with in the last few weeks. Usually when I am low on cash, I will trade in some of my older titles to get either trade in credit or cash (although at a discounted rate.) Both of the major retail chains stress that they will offer such incentives, but lately I find that hard to believe.

A few weeks ago I wanted to trade in some software to get some green for a Washington Nationals trip, but when I go to one retailer, they refused to offer me payment. An associate with a reddish Afro came up with the excuse of "we do not have any more trade in forms." Lucky for me, I went to their rival store, which is smart enough to print out their trade in-forms on the receipt.

I thought this would be a one time issue, but just this Tuesday it happened again. Again I would be leaving for a weekend getaway, so I bring it more junk to trade in. Bear in mind that this is at 7:30 at night, and it's a sure fact that these stores would have enough cash in hand from previous sales. Not from the sales rep standing there. After waiting almost a half hour to be served (made even worse when there is a second sales rep doing absolutely NOTHING), I am suddenly told that they did not have any cash on hand for trade ins.

And which sales rep was it that gave me that excuse? That's right, Mr. Carrot Top lookalike!

So once again I go back to their rival, who not only complied with my trade in, but told me about Carrot Top and his tendency to not take trade ins. I even relayed this information to a friend of mine who works in the same chain as Carrot Top, who even gave me a phone number to call in and complain.

If Carrot Top refuses to let me do any trade ins to cover the release of Madden 06 (granted if it arrives on time, and is not held by airport security or by FedEx), believe me he will be hearing about it.