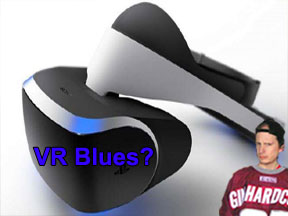 Ok this is a challenge for me to write. After all the

time I spent since last week playing Titanfall, and starting my new streaming channel (which by the way, can be seen here http://www.twitch.tv/snarcast ) it is obvious that I have been out of the loop with everything else that is going on.

But yes, I know that GDC is currently underway. I am doing my best to keep track of what is going on. But all I’ve been hearing about is the unveiling of the PlayStation 4 Virtual Reality headset, or as they are calling it, “Project Morpheus.”
It turns out that Morpheus will be a VR headset capable of displaying in 1080p, though the way the PlayStation 4 has been with showing mandatory 1080p resolution in their games, will the frame rate be just as much an issue? Look at what we went through with Call of Duty Ghosts and Thief, for instance.

Also, Morpheus is designed to work in conjunction with the PlayStation Camera, the Dual Shock 4, and PS Move. I’m curious to see how much that will cost when everything is done.

Let’s take a look, shall we? For starters, you have the PS4 console itself, which is retailing for $400 (that is, if you are lucky enough to find one.) We won’t count the Dual Shock 4 since that is included with the PS4, but unlike the Xbox One and its Kinect, the PlayStation Camera must be purchased separately, and that too is in short supply. So short in fact, that stores like Gamestop raised the price to $70, and finally the PlayStation Move, which if you don’t have one already when you purchased your PS3, you’re looking at another $50.

As for the unit itself, it’s hard to tell how much it will cost. Rumors are abound that it will go for about $300, but for it to be more competitive, the price will have to me much less.

After all, we’ve seen how many console add-ons have failed in the past. Look at the Genesis add-ons. The Sega CD originally sold for $300, and despite having some good games including Snatcher, the glut of FMV based games caused it to be a failure. Let’s not forget the $170 launch of the 32X and the lack of games because of the impending Saturn. The Atari Jaguar had the same issues with their CD add-on, and though it did have innovation, the Xbox 360’s Kinect failed to catch on with the masses.

As for the VR aspect, that too failed to catch on in previous generations. There were plans for a Sega Genesis and Atari Jaguar VR headset, but they both never got past the production phase. And for those who wanted to have a true VR setup in the home, a Virtuality system would have cost you nearly $40,000 back in the early to mid-90s.

That’s the problem I see with Project Morpheus, the fact it’s an add-on. Yes both the Wii U and Xbox One have their “gimmicks,” being the tablet like controller and the new Kinect respectively, so games will be designed to take advantage of both. The VR headset will probably be the same way, but additional games that are designed exclusively for the headset might not sell as well as if it was designed also for the main PS4 console.

It’s going to be an uphill climb for Project Morpheus. Based on past experiences with VR, I just have the strangest feeling that it will fail. And yes, before everyone starts the whole “Todd hates Sony” smear campaign on me again, I have the same opinions regarding Oculus Rift and the rumored Microsoft VR headset as well

Waiting For: SouthPark: The Stick of Truth (Xbox 360)