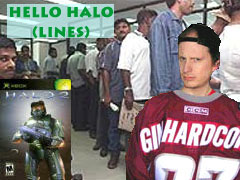 People always ask me why I never preorder.

I have my reasons. They go back to when the Dreamcast was launched, or should I say, was SUPPOSED to launch. While the Dreamcast was scheduled for launch on 9/9/99, the store I preordered from vowed to have it available at midnight. That is, until the day before the launch, and because of lazy mall security, the launch was delayed until the next morning. The result was insomnia, and when I picked up my Dreamcast the only title I could pick up was Soul Calibur. The other titles I preordered, NFL 2K and Sonic Adventure, didn't arrive until later that afternoon.

Preordering took a turn for the worse with NFL 2K1. I had the game preordered at a store back home (which is a two hour drive from my apartment) with the intention of picking it up on the last day of my Labor Day holiday. Imagine my shock when the last day of my vacation (the day the game is supposed to come) arrives, and I'm told the shipment was lost in transport and wouldn't arrive until the next day. Thus I had to have the game FedEx'ed to me overnight to make sure it arrived.

From that moment on, I swore that I would never preorder again. Even if retailers nag me to preorder, I always tell them that if I do so, the game will not arrive on the day it is supposed to, even shoving their old "that's the day it's being shipped" excuse back at them.

For the last few years, it has worked out quite well, partly because some of the titles I requested were shipped to me anyway. However, in the case of Halo 2, I had a challenge. Since Chella had exclusive reviewing rights as part of the Fable deal, I knew the only way to pick up Halo 2 was to purchase it. But for a game with such heavy demand, would it be made available?

Fortunately I have contacts of my own. I asked a friend of mine, a former manager at a local Babbage's, to look into the matter. He told me that he was holding two copies for him to purchase, a Limited Collectors Edition (LE), and the standard release (SE), with the intention of keeping the LE for himself and selling me the SE. Thus if I got screwed over like I have been many times in the past, I would have an insurance policy.

My main plan was to check out stores in the immediate area at 11pm on Monday. The two choices I had available were EB Games, who I still have negative vibes about after the Madden 2005 lie (saying they had it at 7pm when it didn't arrive until midnight), and Best Buy, which I hate going to because of the way they won't leave me alone when I'm just looking at merchandise.

I decided to forego EB because I know they would be the type to say "we will only sell to preorders only," thus screwing over those like myself who do not believe in the concept of preorders. Thus, Best Buy was my only option. Much to my surprise, there was a midnight madness launch event taking place, featuring a broadcast from local radio station DC 101. Prizes such as t-shirts, caps, and a Master Chief statue were given out.

Surprisingly there wasn't much of a crowd, as there were two lines, ones for preorder (of about 50 people) and another for purchases (about 200 by the midnight launch). I was lucky enough to get there before the line got long, but what surprised me the most was the number of copies were available, estimated at 1,000 to 1500! (About 400 were LE copies). Needless to say, I was able to end up with an LE.

Still, with my LE copy of Halo 2, I wasn't finished. I wanted to wait a day or two to see if any more copies were left over. In the end it turned out that both Babbage's and EB Games were able to keep a high number of copies, both LE and SEs.

However, when I checked other places such as FYE and Circuit City, neither had many copies left over, probably only 10 SEs.

I will have to admit, that after the way Best Buy screwed me over earlier this year by not releasing Unreal Tournament 2004, they have turned around with a successful Halo 2 launch. Having more than enough copies to please both preorders and purchasers alike, with many more for the near future is what we need to see more of, especially for AAA quality titles.