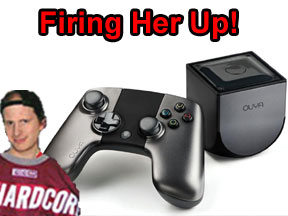 Now to get my hands dirty…

Ok, time for me to write my latest column. Before I do, let me make sure that there is nothing Xbox One related that will prevent me from moving on.

Let’s see, the last thing that I see is how the Xbox One will automatically record the last five minutes of gameplay. Thankfully, that’s not really anything controversial. It looks like I’m safe.
(Ok Todd, time to get serious now. Where was I?)

It’s a console I have been wanting to try out for the longest time. You all know what I’ve been saying about it since it was first announced, and the Kickstarter project that helped fund it. Now one year and $8 million dollars in funding later, the retail versions of the Ouya are now available in stores. Or at least they are supposed to be.

Most of the stores I have checked are either sold our or backordered, with some units being shipped in three to five days. Even worse, I have been hearing reports of Kickstarter funded units not being shipped out to their backers. Now with the retail units being available I can imagine how tough it is for them.

I’ve also heard reports of how the retail unit has resolved the issues found on the Kickstarter units. Issues such as the controller buttons being stuck under the detachable faceplates and lag between the controller and the console are said to be resolved.

And of course I’m hearing about how the Ouya is turning into a haven for retrogamers. A quick scan of the emulators available on the Ouya shows great promise, as a majority of these emulators are designed by Robert Broglia. I have used his emulators on my tablet, and they have all worked great. Atari 2600, NES, Super Nintendo, Sega Genesis, Super Nintendo, PC Engine/TurboGrafx 16, Game Boy Advance, and even the NeoGeo, they all run flawlessly on my tablet.

But as we all know, playing these games with touchscreen controls can be a nightmare. Smartphones and tablets are more designed for touch and gesture based games, not the classics. That will be where the Ouya comes in, as I will be able to use the stock controller in place of the touchscreen. Heck I can even consider plugging in my arcade joystick using the Ouya’s USB port. It will be the closest thing I will get to playing a fully functioning NeoGeo. Even better, it will be a great alternative to spending $200 on the NeoGeo X handheld system.

But thankfully for me, the wait is finally over, because earlier today outside my house’s door, I found our review Ouya console, based on the retail version. Finally after all the wait, the hype, and all the press events, it’s time for me to experience the Ouya first hand, and give my take on an open sourced console with tons of potential.

Expect a fully detailed review of the Ouya in the immediate future, one that is written by someone who will take his time in getting his hands truly dirty with it. I am really looking forward to this.

I’ve also been invited onto the GiN Lounge Podcast show, where I will discuss all things you can do with this new console, and the many game options it offers. So stay tuned for that.