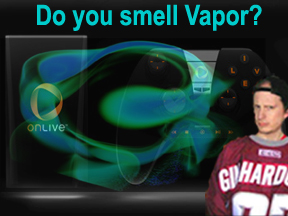 Is there anyone else out there who agrees with me that the OnLive gaming service is destined to fail? I know there has been a lot of skepticism about how the final product will turn out, but I seem to be the only one saying that it for sure won't work. Basing a service where games are streamed via broadband sounds way out there. But beyond that, I've tried something similar to it on my PlayStation 3 and PSP via Remote Play, and the latency on my network killed the experiment.

Granted I'm using a horrible service provider in Comcast, that is notorious for cutting me off for no reason, but in this case I'm not going to be blaming them should OnLive have any issues.

There are problems with other Internet service providers too, such as Time Warner Cable, who started to enforce bandwidth caps on their service, and charging fees for those who go higher than said bandwidth. Almost all ISPs will either enforce caps or force people to pay more for service if they go over a limit.

Now imagine a game service like OnLive that needs to stream upwards of 5Mbps to provide HD quality with supposedly no lag for games. Can you imagine how quickly any bandwidth cap would be broken?

But my biggest criticism of OnLive is that aside from a demonstration that was shown at GDC earlier this year, no one has ever mentioned any personal experiences with it. It would be so easy to rig a demo at a show like GDC where few press, especially the mainstream ones, attend. Run a game on a server and stream it about five feet to the screen with no lag and no Internet between source and destination. So, are we going to get anyone's opinion who has actually used the service in a real setting before the service is supposedly open this winter? Or are we going to have to deal with PR related material without any known facts?

We've seen it with Indrema back in 2000, claiming that by being a Linux based gaming console, it would be the first ever that was "open source." The result: vaporware due to lack of funding.

And of course we can't forget about the legendary "Phantom," a game console whose name truly speaks for itself. It was originally supposed to be a console that would provide on-demand gaming via an online subscription (sounds similar to something, hmmm). It was announced in 2002 and on display (in prototype form) at E3 2004, but the system was constantly pushed back until, you guessed it, it became vaporware due to lack of funding.

And what was the consolation prize that Infinium Labs gave us? A freaking lapboard! Wow! I can pay $129 for a raised keyboard and mouse on a swivel that I can play on my lap! Where can I get that? On their website"? "Currently not available…" $*^#! I so wanted one (sarcasm.)

And that brings us to the new niche console, OnLive, and also the upcoming E3. Would we finally be able to get a first hand account at the gaming event of the year?

Turns out that OnLive's COO, Mike McGarvey, believes that E3 is a "retail-oriented conference, both for retail platforms and retail publishers, and OnLive is neither." However, he does claim that OnLive will show "plenty" in time for the console's launch. Excuse me while I have an order of fries to go with that main course of B.S. Could it be that OnLive, now that they let the cat out of the bag at GDC, didn't want the full press core to descend on them and you know, actually check the facts? I will believe it when I see it first hand, and not on a website, magazine or (gasp) G4.

In fact, I encourage OnLive to prove to me that their service exists. Infinium Labs claimed they would provide GiN with a working Phantom console when it was completed, but of course we know how that turned out. They always say three times is the charm, and we've already seen two vaporware strikes this decade in Duke Nukem forNever, and the ghostly Phantom. Watch OnLive complete this trifecta!

So OnLive, what have you got to hide?