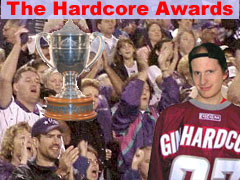 Our staff might be busy with counting up all the nominations for the Game of the Year awards, but I know it will take a long time to finish (remember our last awards were not given out until April), and even with some changes that I recommended (such as making platform awards for EXCLUSIVE titles only, as well as a multiplatform category) so I wanted to give you my picks now.

Also, I know that the end results will conflict with my additions.

In the meantime, I am always thinking forward, and came up with my own special awards that no one in our staff would dare think of. These awards (or booby prizes, if need be), are based on my personal opinion, and do not represent the thoughts of everyone here at GiN.

The first award I came up is the "What the F—?" award. Taken from the "I Love the 80s Strike Back" series, Gilbert Gottfried gave a "What the F—?" to one unexplainable event for each year of the 80's. In the case of 2004, I have to ask "What the F—?" to Bungie software for their ending to Halo 2.

After three years of speculation, hype, and delays, we are left with an incomplete game? Come on Bungie, you punished us enough for the last three years, including two E3 events where the demos were either shown behind closed doors or after waiting in line for hours, only to punish us with a game that leaves us with an empty feeling? Even rumors involving "February 9th" are not enough to remedy this. I could add another "What the F—?" for making us play half the game as the Covenant Arbiter, but at least he is nowhere near as bad as Raiden was.

Nonetheless, Bungie could have had worse. They are not the recipients of the "Hurry Up and Get Your Lazy Butt In Gear" award. That award goes to Sony Computer Entertainment with regards to Gran Turismo 4. Delay after continuous delay, even missing a Christmas launch is bad enough, but when you decide to nix the much-touted online multiplayer functions at the last second, that is just inexcusable. One of my inside sources says that it is going to be released on February 8th, but don't be surprised if it's not. Heck, I wouldn't be surprised if we see another demo of it at E3.

While we are on the subject of delays, I have a new award (or in this case, dubious honor) I wish to give out. It's called the "Most Appropriately Named Product" award, which goes to the Infinium Labs' Phantom Gaming Service. I know I'll receive the wrath of Infinium Labs' president Kevin Bachus for this award, but I'm sorry.

This service is taking way too long to come out. It was scheduled to be released last November, but was held back to promote their service more. It is now scheduled for a second quarter 2005 release, but why do I feel that will be pushed back again? I know I've been very harsh on the Phantom, but after seeing other consoles like Project X (which eventually became the ill fated Nuon DVD technology) and the Linux based Indrema, is it any surprise?

The last dubious honor I want to give out is what I consider the "Biggest Disappointment" of 2004. Without a doubt, that dishonor has to be given to Half Life 2. Again I wish to spread my disgust over another game that is under development for three years, dealing with constant delays, with excuses of a code leak, and legal action between Valve and VU Games. But that doesn't upset me as much as the final product release.

Not only is it required that Half Life 2 be played using Valve's Steam service (which constantly bogs my computer down with updates), but the game's execution is horrible. Why is it that every time I turn around or move to a new area, the hard drive kicks in, causing the game to freeze and the sound to stutter? A patch provided by the Steam service is said to fix this matter but it still happens. What I don't get is how HL2 only requires 256 MB of RAM to run, and my computer bogs down? And I have 512 MB of RAM!

And while on the subject of HL2, I do have one more sub-dishonor I want to give, and that is my "Biggest B.S." award for all the PC gamer magazines that gave Half Life 2 the award for best graphics over DOOM 3. I would like to know what they were thinking.

Were they so disappointed by the gameplay of DOOM 3 that they would berate the graphics as well? Look at it technically. As I said before, Half Life 2 bogs down constantly despite me using a ATI Radeon 9800 card with DirectX 9 (HL2's native format) and 512 MB of RAM (256 is the minimum). On the other hand, DOOM 3 requires 384 MB, recommending 512 MB, specializing with the nVidia chipset, and it runs smoothly on my computer! But this is the worst part: I mostly play DOOM 3 at low detail to get the fastest frame rate, and even then looks more impressive than Half Life 2 in high detail!

Ok, enough of the bad, it's now time for the good. I will keep DOOM 3 in mind as I am giving it my "Most Underappreciated" game of the year. I was sick and tired of critics trashing DOOM 3 because of it being unoriginal. Uh hello, Mr. Kasavin and the rest of your Gamespot staff, but DOOM 3 is a RETELLING of the original. IT IS NOT A NEW GAME IN THE SERIES!

These critics are pretty much the same type as those who hated the new Galactica TV series just because Starbuck was female! I, unlike them, went through DOOM 3 with an open mind, and I was never disappointed in the final product. As a retelling of the original story, it worked, and I will give another award for it, the "I Was So Scared Out of my Mind" award.

The next award I want to give out is the "Payback is a bitch" award, and to that award, I am giving it to Electronic Arts. Actually they aren't the ones providing the payback, but it's their victim, Sega/Take Two/Visual Concepts, that is suffering. With acquiring the exclusive NFL license, EA Sports has screwed over Sega for good. Now Sega, you see how it is for all us poor Dreamcast owners who were stabbed in the back, and not even your Matrix Online publishing rights is going to fix that. Hurts, doesn't it?

An annual award I like to give out is what I call the "Badass of the Year" award. In the past, it is given to a character that I consider to be so dominating at what he/she does that they virtually steal the spotlight. Past winners of the award included Solid Snake (2001), Tommy Vercetti (2002), and Lt. Kara "Starbuck" Thrace (2003), but for this year, I have to give it to the younger version of Revolver Ocelot from MGS 3.

In the past, Ocelot was a mysterious character. We were never aware of his true identity. Was he really Russian? Former Spetsnaz? Patriot Spy? With going back in time to 1964, we learn more of this enigma, how he becomes interested in the art of torture, and how he finds his skill with revolvers as opposed to automatics. Even when he does something strange, such as "meowing" to call his troops, it still appears cool. Not many characters can do that.

While I'm on the subject of Ocelot, the guy who plays him, Josh Keaton, is a co-winner of this year's "Best Voiceactor" award. I never heard of him before, and I was curious to see how he will continue the success that Patric Zimmerman had with the older Ocelot. Needless to say, I was more than impressed with the final product. I couldn't believe how he added more to the coolness that Ocelot exhibited.

But as I said, he was a co-winner, as another newcomer, Chris "Young Maylay" Bellard, beat out even high-end talent (Samuel L. Jackson, James Woods, etc.) in his role of Carl Johnson in GTA: San Andreas. While he might not have the badass-ness that Tommy Vercetti had, Maylay was best fit for CJ. Maybe the fact that he is an up and coming rapper is the reason, but still, he was perfect for the role.

Lastly, I want to give my personal choices for each console, and what I consider to be my choice for game of the year. I will just list them as I hope to speak more about the real awards when they are announced:

XBOX: Halo 2 (despite the horrid ending, the XBox Live mode is top notch)

I am interested to hear everyone's opinion on my awards, assumedly I will get tons of hate mail. Bring it on!

COMMENTATOR’S NOTE: It seems that payback is a bigger bitch than I thought. After this article went into press, it came to my attention that EA Sports nabbed exclusive rights to Sega’s bread and butter, ESPN, as part of a 15-year licensing deal (with an option to terminate after ten years.) First losing the NFL license, and now losing ESPN? Payback is not only a bitch, but also that bitch’s mother!