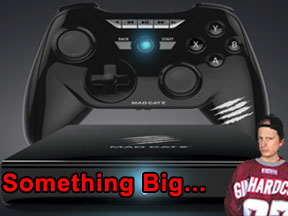 This truly is the start of the next-gen console wars. We already have the Nintendo Wii U available for $300. Next month, we know there will be a heated battle when Sony first releases the PlayStation 4 for $400, followed by Microsoft unveiling the Xbox One for $500. So yes, already we are looking at a total of $1,300 if people want to buy all three consoles, and that’s not even including any games or accessories that they might want as well.

As for myself, you all know where I stand so far. I will be holding off until I get my tax refund, and unless Microsoft really convinces me otherwise, such as offering a $400 Xbox One that does not include the Kinect, then I will be putting all of my money on the PS4. But yes, it’s still too early to tell, and there are still those Xbox One exclusives that got me curious, namely Killer Instinct. However, paying an additional $200 for the arcade style fight stick is also cause for concern.

And then of course is the PC side. I know all the PC elitists will be coming after me for this, but once again I’m going to say it. Not everyone has a king’s ransom sitting around to spend on a PC. I’d rather pay $500 for a console than for just the graphics card, let alone over a thousand dollars for a quality gaming laptop.

Trust me, in this economy we don’t have tons of cash to spend on the latest, and it just keeps getting harder and harder for us, which is why I like to look for good deals on something. Case in point, when I reviewed the Ouya earlier this year. I was very happy with its $100 price tag, and thought it was the perfect price for a hackable Android microconsole. I finally had something I can play all my emulated games on with a decent (if anything) gamepad on my large TV. Heck it was finally my chance to finish playing Earthbound via SNES emulator before Nintendo finally released it to Wii U Virtual Console.

However, there was one huge gaping flaw the Ouya had that I couldn’t completely stomach: the fact it did not support Google Play. That meant any game I had on Play that ran on both my ASUS tablet and my Samsung Galaxy S4 would not play on the Ouya. It ran the Amazon Appstore fine via sideloading, but not all of the apps would work on it.

So once again I was back to hooking up my tablet to my large TV. But with the keyboard dock breaking apart at the seams, it made hooking up an arcade joystick and keeping the display in an upright position very difficult. I needed to find something new.

About a month ago I saw that Mad Catz was working on its own Android based microconsole, the M.O.J.O. (which I will just call the Mojo from here on out.) The specs for the Mojo were downright impressive. We are talking an NVIDIA Tegra 4 processor clocked in at 1.8 GHz, 2GB of RAM (identical to what I have on my S4,) 16GB of internal storage with the ability to add either a microSD card or an external hard drive via USB 3.0, Ethernet and wireless (up to 802.11n,) Bluetooth 4.0, and HDMI out. The controller also resembles an Xbox 360 controller more than the Ouya’s ever did, and could even clip on to use on my phone as if it were a MOGA Pro. And ever better, the console would play games not just on Google Play, but also on NVIDIA’s TegraZone, the Amazon Appstore, or any other alternate marketplace I choose from.

All of this on a console that is running stock Android 4.2.2 Jelly Bean! Safe to say, this sounds like a GREAT idea for an Android console. I would buy this in a heartbeat!
(Looks at the price tag…) $250?!?

Yes, that’s right. $250! Mad Catz expects us to pay $250 for this console. I don’t care if it is the perfect example of an Android microconsole done right, $250 is way too much to ask for it. If it was $150 I’d say it would be a better deal. $100 to compete with the Ouya would be a steal! But at $250, I’ll pass. I do hope Mad Catz comes to their senses and lowers the price on it, because come December, when gamers are buying their PS4s and Xbox Ones, they will be leaving this console on the shelves to pick up dust, and I don’t want to see that happen.

Please Mad Catz, listen to me. LOWER THE PRICE!