You all know how much I am a (recent) fan of both the NES and SNES Classics. Yes, I was originally critical of such products compared to playing these games on my laptop, and yes I know that I can just get a Raspberry Pi and make my own plug and play console, believe me I hear it all the time from those who won’t just shut up about it. But when I was able to hack both my NES and SNES systems with many more games and still have enough storage space to add more in the future, they’ve earned a permanent HDMI port on my 4K television.

Since they have been readily available in stores, I have been very impressed with what Nintendo has come up with. These consoles surely are a way for them to print money, but as always there are those who want to copy on Nintendo’s success. Over the course of this week I heard about three different plug and plays that will be coming out soon or in the immediate future, but with each of them I have my own concerns that I hope get address.

At first, while this was first announced a few months ago, we had reports about the upcoming Sega Genesis mini plug and play being delayed until 2019. It is not a surprise for me and many others who were looking forward to it, only to find out that Sega would once again be partnering with a company called AtGames to work on it.

I have had a mixed relationship with AtGames. On one side, I own three of their consoles: the Intellivision Flashback, the Colecovision Flashback, and their first Atari Flashback Portable. Each of them had their own issues, mostly in terms of sound, but I still consider the Intellivision one of their better plug and plays. I still use it to simulate football games to this day. The Colecovision FB was also good, but its library was somewhat hampered with a ton of homebrew games and a lack of arcade ports that the Colecovision was known and loved for, which I guess was due to licensing. The Atari Flashback Portable is an adequate handheld which allowed more games to be added (to varying levels of success) via an SD card.

But it was their previous Sega Genesis consoles that got them the most notoriety. While their games might look the part, they sure did not sound like them. After all, listen to how they butchered the Sonic 1-up fanfare.

So, after obvious negative feedback, Sega did the right thing and parted ways with AtGames and will be working on their own Genesis Mini for 2019. I really hope they can do it right and be as close to the real Model 1 I used to own in the same way Nintendo did with their consoles.

And as a result, make Streets of Rage 2 sound as awesome as it did over 25 years ago.

But in the meantime, AtGames is at it again with another console, which basically looks like they gutted their last Genesis console (complete with the SAME CONTROLLER,) behold. THE LEGENDS FLASHBACK! People tell me, does this line up remind you of another failure called the Retro-Bit Generations? Did AtGames make a deal with Retro-Bit to license the same games? Who knows these days, but it’s obvious they had to do something to get rid of their Sega hardware.

Now let’s move onto Nintendo. Yes, they have not announced anything yet but rumors about an N64 Classic have been talked about for weeks now, but now there has been a European trademark filed by Nintendo that might make the N64 a reality. I know there will be those who are looking forward to this console, but I have my concerns. For starters, what games will come with it? I’m guessing that Nintendo will release this with 20 games for at the most $90, but aside from the obvious games (Super Mario 64, StarFox 64, and Zelda: Ocarina of Time,) what else is there? I know there are going to be those who would add Perfect Dark and Conker’s Bad Fur Day, but those are Rare titles, and they are now owned by Microsoft. Maybe a licensing deal can be made so they will be added to the Mini (in the same way Donkey Kong Country was on the SNES.) Goldeneye you ask? Good luck with that, as Rare nor Nintendo own the licensing rights to James Bond anymore. That’s why an X360 Goldeneye remaster wasn’t released (despite there being evidence of one) and only Perfect Dark came out.

I’m sure modding will be done to the console but in this case, storage space is going to be a concern. Sure it was easy on the NES and SNES, but games on the N64 grew as high as 256 MB in size. So unless Nintendo includes a large internal flash storage, you aren’t going to store many games on it.

I’m also hoping that the N64 Classic doesn’t shrink down the size of their controllers as they were already larger than the previous two consoles. That would be a huge mistake on Nintendo’s part.

Lastly, there is the PS1 Mini. Oh what a huge contradiction this is turning out to be. For those of you who have followed the PlayStation 4’s stance against backwards compatibility, whether it be making you repurchase PlayStation 2 games just to get the benefits of trophies and enhancements (instead of letting you just insert your PS2 disc,) or having to stream your PS3 games on PlayStation Now, Sony always shunned the type of backwards compatibility that Microsoft has successfully done with the Xbox One. And yes, I know true PlayStation 3 backwards compatibility would be impossible due to the complex architecture of that console’s Cell processor, but they could have allowed PS1 and PS2 compatibility. Even their previous systems allowed it!

Then there is that comment from Jim Ryan, Sony’s Head of Global Sales and Marketing, made during an interview with Time Magazine:

“I was at a ‘Gran Turismo’ event recently where they had PS1, PS2, PS3 and PS4 games, and the PS1 and the PS2 games, they looked ancient, like why would anybody play this?”

Still clueless in my opinion. There are those who like playing classic games. I play a lot of them on my Xbox One, and it also adds something to my console that I cherish more: value! But no, Sony wants us to re-purchase these games I already owned, and that’s where the PS1 Mini comes into play. It is planned to include 20 PS1 games with two standard controllers (not the more popular Dual Shock analogs) for $100. Five games were shown: Tekken 3, Wild Arms, Final Fantasy VII, Jumping Flash, and R4-Ridge Racer Type 4, but it’s the last one that makes me wonder why not use the Dual Shock?

For those who remember, R4 put analog control to a premium. When the game was released, it was bundled with its own controller, the Jog-Con, a high quality analog steering wheel controller that even implemented force feedback. 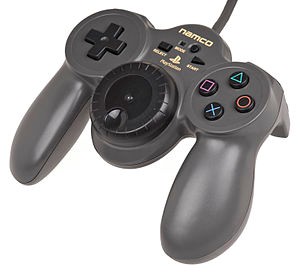 Going from that to a digital control would be tough for many people to get used to. Also, I go back to the modding community as I’m not sure how much storage this will include or if it will be hacked or not.

Even further, not many people will realize this, but Sony had tried this once before and failed. Anyone remember this little wonder? The PlayStation TV? This was a console released during the “micro-console” craze in 2015 that in essence was just a PlayStation Vita without the built in display and hooked into your TV via an HDMI cable. It was able to install additional PlayStation 1, PS Vita, and even PSP games to an external (albeit proprietary) memory card through their PlayStation Store and included a Dual Shock 3. However, no one at the time wanted it, and Sony had it discontinued.

Since the announcement of the PS1 Mini, while that console’s preorder units were selling out, interest in the PS TV spiked, and you know what that means. That’s right, RESELLER ALERT! Amazon has the PS TV for $199 (a 100% markup from its original $100 asking price) while those on eBay have spiked the price to well over $400! The memory cards? Well if you want a 64 GB, you’re going to have to fork over $100 on Amazon! And all this, because Sony will not just make backwards compatibility available on the PS1! And if you see the success Nintendo is having with their minis, just copy them!

Yeah, we’ll see how well this works out for them. I know the hardcore will definitely get one of these but I definitely won’t. I’ll just keep waiting for backwards compatibility.