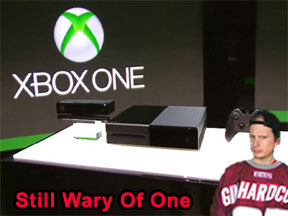 Or Did I Make the Right Decision Already?

It’s now official. All of the Big Three’s eighth generation consoles have been announced. With last week’s announcement of the Xbox One, we now know what will be coming out by the end of the year (as well as what’s already out with the Wii U.) However, when Microsoft announced the Xbox One last week, all I noticed from the online community was harsh criticism and even vitriol over the presentation. And for the past week or so, all I wanted to do was defend the Xbox One and to tell people to be patient and wait for E3 to get the full details.

But it was all for naught, because all I heard was "I’m getting a PS4" or something similar to it. I even mentioned this on a previous GiN Lounge about waiting for E3, which is just under two weeks away.

But as I sat down and looked more into detail about the Xbox One, I have to admit that I’m very concerned with what has been announced. Conflicting reports about used game sales requiring an activation fee or not, as well as the lack of 360 backwards compatibility (the result being a change from the 360’s PowerPC architecture to the One’s x86) came across as huge negative factors for me.

There are also those who complained about the lack of game footage in the presentation (aside from a trailer for Forza Motorsport 5 and Call of Duty Ghosts,) but for those I ask this: remember when both the 360 AND the PlayStation 3 games were on display at their debut E3 events? The 360’s games ran on Apple Mac G5 alpha kits, and the PlayStation 3 ran on dedicated servers, not on their actual hardware. Again I’d say wait for E3 to see games for both the One and PS4, but keep in mind they might not be indicative of the final hardware.

Let’s see how many people take my advice on that one.

But still, it’s still way too early to make my decision on the Xbox One. I can partially say the same thing about the PS4. Though I am happy to see that Sony is learning from their past mistakes with the PS3, such as creating an easier development environment via an x86 architecture. The backwards compatibility issue is also a concern since Sony announced using their Gaikai cloud gaming service for emulating previous generation titles. I still have my doubts about cloud gaming after OnLive going under, and the fears of gameplay lag being an issue. I do admit that allowing used games on the PS4 is a strong point, but again, I will wait to see how that works out.

And that brings me to the only eighth generation console that is currently available: the Wii U. Earlier this year I purchased a Wii U Deluxe Set, and sadly there hasn’t been much to play for it. Aside from New Super Mario Bros U, NintendoLand (a pretty impressive launch title and tech demo,) ZombiU, and Monster Hunter 3 Ultimate, there hasn’t been much for me to play, at least as far as Wii U games are concerned. However, Nintendo, with their announcement of the 30th Anniversary sale to coincide with the Virtual Console relaunch, has been nothing short of amazing.

Think about it: Balloon Fight, F-Zero, Kirby’s Adventure, Punch Out (sadly not the Mike Tyson version for licensing reasons,) and Super Metroid, with Yoshi and Donkey Kong to come soon, for only 30 cents! Considering these games cost $5 for NES and $8 for Super Nintendo, these are quite the deals to win gamers over. Yes I know it’s not new Wii U games, but it surely is enough to win myself over. And again, I’m going to say that despite Nintendo not being deeply involved with E3 this year, I am looking forward to what they have to announce.

Using the Nintendo Direct announcements is a good way to show off the latest games, as well as what’s coming up for Virtual Console. Just the thought that Earthbound is FINALLY being released in the US is news in itself.

But there are also two elements about the Wii U that put into an advantageous spot over the One and PS4: we already know that the Wii U will play used games without any restrictions or reactivation fees, and it also functions as a fully operational Wii. Sure you need to buy a Wii Remote and a Nunchuk controller to use the Wii emulator, but it’s still backwards compatible. I just wish the Wii U could also play GameCube games (I so miss playing F-Zero GX,) but Nintendo has talked about GC games being added to the Virtual Console, so there is hope for that.

I still stand by my belief that backwards compatibility and used game access can easily benefit the Wii U, and I hope other games, and other companies (I’m looking at YOU, Electronic Arts, though I’m not expecting much) will get this through their thick heads and support the Wii U more. Now more than ever, I’m not regretting my purchase at all.

STILL Waiting For: Injustice (360) Come on WB, why be so stingy with the review copies?