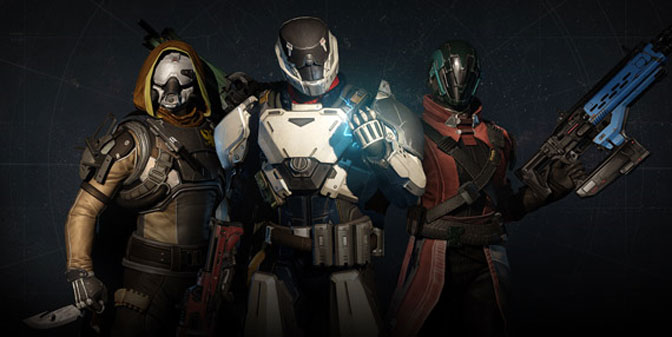 WARNING: This column represents my personal opinion about my experience with Destiny, and does not represent the official GiN score that was given on the product review.

Now…with that out of the way, time for me to take over. Destiny Is like Bioshock Infinite for me, and NO, That’s NOT A Good Thing.

I’m going to let you all know that I did everything I could to give Destiny a fair try. Even with the way Bungie acted towards their Halo faithful in the Xbox community and throwing a knife in their back, and in the way Activision blatantly lied in the advertising by not only claiming the game is a PS4 exclusive, but denying Microsoft any means to advertise the game in the UK, I was not going to let that sway my opinion in one way or another.

Though I have to admit, what Microsoft did with that Destiny fragrance ad was sheer genius.

But yes, I picked up Destiny on launch day, and played it on both the PS4 and the Xbox One. After spending time with both versions, I ended up keeping the Xbox One version from Gamefly as I had more of my friends to play with and hoped it would have made the game somewhat enjoyable.

However, despite spending hours upon hours of playing the game, taking part through the story mode, engaging in strike missions with near indestructible boss enemies, and ending up with nonstop rounds of earning weaker weapons and armor which felt like excessive grinding, it ended up feeling less like a shooter that I progress through easily, and more like a genre that I’m not a huge fan of…the MMO.

It just felt like the same thing over and over again, and over time I just got tired of playing the game. Even at the request of several of my friends to get back on, including one who encouraged me to find the now closed “Loot Cave” (or as he called it, the “Murder Cave,”) I was just done with the game.

And knowing that plans for at least two paid full DLC expansions to start with made me feel like an unending money pit that I do not want to dive into any further.

After leaving Destiny with no intention of playing it any more, I spent some time thinking over what I played, and it occurred to me why my experience with Destiny seemed so familiar. It reminded me of another game that I played last year, one which debuted with such massive hype, and in the end, felt to me like it was nowhere near worthy of all the hype that it received…Bioshock Infinite.

Yes, I felt the game felt as overhyped as Bioshock Infinite, and you all know how I felt about that game when it came out. That’s my feelings about Destiny. Believe me people, I really wanted to like the game. I really did. But with all that hype, it ended up being a letdown to me. In fact, another shooter I played earlier this year, Wolfenstein: The New Order, was far more entertaining.

In the end, I traded in my copy of Destiny to help cover the cost of Forza Horizon 2, and from what I’ve played of it so far, I enjoy it a lot more than Destiny.

And I know a lot of you are going to come after me with pitchforks just because I did not like Destiny, but as the disclaimer at the beginning says, it is my opinion and no one else’s. Not everyone is going to like the same games, and I’m sure there are those who do not like Forza Horizon 2 despite my enjoyment of it. If you like the game, great, more power to you. But it’s just not my type of shooter/MMO hybrid.

Waiting For: Sunset Overdrive (Xbox One)

One thought on “It’s Just Not My Destiny”