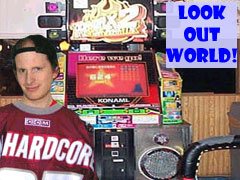 For once, I was not the victim of a disaster. Despite every weather channel (local, cable, and satellite) hyping up Hurricane Isabel as the next Hugo, I was able to walk away unscathed with all my equipment and my apartment intact.

I really love the way how the media want to cause mass hysteria whenever rain or snow hits this area, but it turns out to be nothing. I know there are some people in the DC area still without power, and to them, I apologize for my comments. But when they insist people to board and tape up their doors and windows, it starts to get out of hand.

Nonetheless, the fact that I didn’t have to spend more money to get my apartment back to normal meant that I can use it to look to the new titles that came out within the last few weeks. Starting with WWE Raw 2, I was pleased to see that more match modes were added (Hell in a Cell is always a nice plus), but I just couldn’t really get into it much. Maybe it’s because WWE titles are becoming the same thing with just different rosters like I mentioned a month ago.

Two new EA Sports titles were also on my hit list. NASCAR Thunder 2004, which came out last week, was the first one I had to try out. Let me tell you, adding the new "Grudges and Alliances" system suddenly ups the game’s difficulty. I can’t force my way to the front of the pack by knocking other cars off the track. These AI drivers will remember what you did, and will not give any slack in future races. I ended up in the wall a few times as a result. At least doing this makes the game more realistic, yet much more difficult.

NHL 2004 came out earlier this week, and after dealing with a couple unprofessional sales reps to get it (they were FORCING me to preorder it despite having tons of copies in stock, and demanding I preorder Tiger Woods 2004 as well, which I didn’t want.)

I was finally able to get the other title I wanted to work on for my NHL report coming out on October 9th. After a somewhat successful stint with ESPN NHL, which plays great, I was still having a serious problem with too many shutouts. Heck, Olie Kolzig averages four shutouts a season, and after 20 games, he already has six. I was looking forward to EA’s product, considering the hockey gods at Black Box were responsible. Let’s just say that aside from a weaker display, the gameplay is spot on perfect. They even got the fighting right (which itself is a major feat). The best thing perhaps is that Don Taylor and his moronic joke-filled color commentary is all gone, replaced by a more responsible and serious Craig Simpson.

These last two weeks weren’t all great though, as I had my first hands-on post-E3 experience with the Jokia Un-Gage. I’m sorry if you Nokia lovers are offended by the name I gave to your new system, but I am in no way impressed. Aside from a surprising notion that Tomb Raider actually ran smoother than I thought (but I only saw the first stage. Try later stages to see how fast it runs), I still couldn’t get it running right. The control is horrid, as using the number keys for actions is just confusing. Having to replace the postage stamp sized games is a job in itself (open the cover, remove the battery, then slide the game out, and risk losing it), and I would just love to know how you can use it as a cell phone with its design. What is Jokia thinking?

Checking two stores that I went to (not the one who gave me hell about not pre-ordering NHL though), I noticed that both stores have a total of three preorders! THREE PREORDERS!!! Am I the only one who thinks this system is the worst idea in a console since the Virtual Boy?

But the biggest concern I had recently was the release of DDRMAX2. As everyone knows since I’ve come out of the closet, I have become a DDR junkie. Though I had to take three weeks off after spraining my knee on a bad drop, I am now back into the DDR fold. My catch involves the tracks that will come out with DDRMAX2. When Konami releases a DDR title for the US, they usually take out the best tracks that were in the arcade (I still won’t forgive them for not including Butterfly in the first DDR USA release). Though later releases (Konamix and DDRMAX) improve in quality, what I saw in DDRMAX2 concerns me. I didn’t notice many of the tracks that I have played with DDR Extreme, and some of the tracks released for MAX2 now include actual music videos instead of the usual DDR eye candy. I don’t know if I will be into this visual change or not.

There is an option for me though. Konami Japan is releasing DDR Extreme on October 9th. Based on my past success with importing Para Para Paradise to my PlayStation 2, I will be looking forward to it. From what I read there are supposed to be over 100 songs from all the different DDR releases in comparison to the 65+ that MAX2 has, all from the arcade release. I also will be able to import it from a location in New York, so I wouldn’t have to worry about spending mass payments for EMS shipping.

My only concern is that Konami might make Extreme immune to any mod chip technology. I don’t use a mod chip (I use a Slide Card and a CD called Swap Magic to play my imports), but I still have a concern of whether or not the game will be cracked on my system. If it is, I’ll be in good shape. Otherwise I will be about $60-70 in the hole.

I might end up picking up both titles, but if anyone has any info regarding Extreme that could help me finalize my decision about importing, let me know cause it would really help me out.