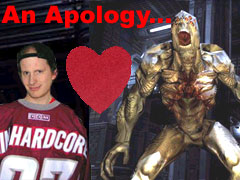 This does not happen often, so listen up!

Two weeks ago I wrote about the announcement of DOOM 3 reaching gold status, and my doubts about it arriving on the planned date of August 3rd. The reason I was adamant about my opinion is that I have seen many titles delayed in the past, and with the exception of any title done by Blizzard, extensive delays result in the finished product failing to meet expectations.

Look how long we had to wait for Daikatana to come out. Delay after countless delay caused an anxious crowd to lose their patience. In addition, a threatening ad saying that "John Romero is about to make you his bitch" added more fuel to the fire, and when the final product limped onto store shelves, it was so poor that it resulted in the fall of Ion Storm's much lauded Dallas tower.

Why do I use the Daikatana reference so much when it comes to DOOM 3? It is because John Romero was with id when both DOOM and DOOM II were released to the public. He, along with John and Adrian Carmack, were the brains behind one of the most popular computer game series in history. I thought that DOOM 3 would suffer the same fate that Romero did with Daikatana.

Fast forward to last Tuesday. Reports from several web sites surface, where DOOM 3 is released to the gaming public. Copies sell on eBay for over $100, and the BBC reports that 50,000 illegal copies are distributed via peer to peer networks. However, on that same day, the bigwigs at IGN are crying that they did not get their copy yet.

It was on that note that I called my friend at Gamestop, who reserved a copy for me to pick up. I was surprised to see that they would be selling pre-orders for the game starting at 7 pm that night, the day before the official street date.

On a side note, select Best Buy stores offered Midnight Madness sales, offering the game at 12:01 am on August 3rd. Upon closer investigation of the local Best Buy, I found out from the store manager that they had 650 copies available (which weren't seen physically) and they would be selling at 12:01. I even went as far to ask if they were holding copies for employees (or to be sold on eBay), which they denied. I concluded my inquiry by stating clearly, "I don't want to be screwed over by you guys like when Unreal Tournament 2004 was released."

So 7 pm comes along, and I make the 45 minute drive to Hagerstown, MD, and when I got there, my friend slid over the counter my copy of DOOM 3. I had to open it first to make sure the discs were all intact before I made my purchase and once I got home, I installed the game and gave it a quick run to see if the game would move at a slow clip, rendering it unplayable.

To keep it simple, after all of this, I have only one thing to say to id Software and the folks at Activision.

I'm sorry that I was so impatient with you guys for taking so long to make such a scary, yet so enjoyable title. Thank you for going to great strides to make sure that a high-end title like DOOM 3 would run well on my computer. I now realize that I don't need to spend several hundred more dollars to upgrade my computer just for one title (remember I went through this for DOOM 1 over ten years ago,) and I really need to commend id for all their hard work.

I have only played five hours so far. Considering that most previews have set the game length between 20 and 30 hours, I will have to work on DOOM 3 more before I can compose a full review, though expect it soon. Needless to say, when it comes to delays, id might be the next Blizzard, as opposed to 3D Realms.

Now, Valve, about Half Life 2"