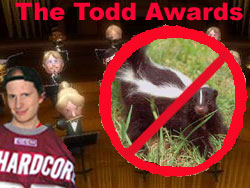 2008 Was Interesting If Nothing Else

I didn't think that 2008 would be a great year for gaming, especially after how good 2007 was. But it seems every year I come away more impressed with what comes out. Of course, there are also those times that I regret being a gamer, let alone writing reviews (or recording podcasts) about them. By the time this is posted, both Kelly and I will have provided our take on the top and bottom five games of the year, which can be listened to by clicking on the microphone icon on the top left corner of this page. However, due to what I hate to call "time constraints," I was not able to provide some special awards that I wanted to give out. That will be taken care of right now.

I will start off by getting right to the heart of the matter. This year I sold my Wii, the reason being the lack of quality games being released to a hardcore audience. The showing at E3 pretty much sealed the deal, and in particular one title. I'm talking about one title that is so bad that it would even be a cure for insomnia. I don't even think it can even be called a game, and as a result it gets my "Game Most Likely To Make You SELL Your System" award. That dishonor goes to Wii Music, a title so horrid that it received my first ever audio review, and yes it was just as painful to record it as it was to play.

Surprisingly Wii Music is not the only music/rhythm game to receive a dishonor this year. While Rock Band 2 and Guitar Hero World Tour both excelled in creating a rocking (no pun intended) experience, consisting of deep gameplay, believable note patterns, well crafted instruments, and a vast soundtrack of all master tracks, it was the original, Konami, who messed it all up with Rock Revolution. We're talking about a game that only has only 41 songs (with all but two being covers,) no lyrics, a drum set design that defies any sense of logic, and a strong case of "Too Little Too Late," which is the dishonor it receives; no wonder the game sold less than 3,000 copies!

Downloadable content was huge this year too. While my tradition of getting a new game each week on Xbox Live Arcade may have waned down due to lack of interest (not to mention all the Rock Band songs,) there were some titles I was very proud to download, while there are a few that I regret wasting my money on.

What I considered to be my "Horse Armor" this year is going to result in a lot of hatemail from fanboys but I don't care; the game's control frustrated the daylights out of me. That game is Super Street Fighter II Turbo HD Remix. While the game frustrated me to death (please explain to me why I JUMP every time I try to do a fireball motion,) the low frame rate on some of the characters and the butchered music is also a huge disappointment.

Thank goodness the latter can be switched back to the arcade soundtrack, but if only the 3DO soundtrack was also present.

On the other side of the spectrum the DLC that I consider to be "Worthy of Full Price" is actually another remake, but this one feels like a whole new game. Taking the original 1988 classic Bionic Commando and putting it in a 2.5-D environment might have been enough to get my interest, but to update the storyline and even feature a remake of the evil leader that still subtly resembles his NES persona (even going as far as calling me a "damn fool" again) and to even make the battle against the Albatross a whole stage in itself made Bionic Commando Rearmed the best DLC purchase I made all year. At 800 points, it was a steal. I would easily purchase it for 1,200!

I have one more dubious honor to give, and once again it shows my personal taste against traditional RPGs (not the good action based ones such as Fallout 3 or Fable 2.) But I'm referring to the ones provided by Square Enix. I know there are a lot of people out there that enjoy these games, no matter how tedious they get, and no matter how many emo leads they get, having annoying twins tag along with them, but my poor co-host Kelly had to suffer through both Last Remnant and Infinite Undiscovery, two titles that I actually refused to review.

And now with the announcement that Final Fantasy XIII will be also coming out to the 360 in the US, I guess I speak for both of us that Square Enix gets the award for "Enough is Enough!"

Lastly there is the time honored tradition of the "Dumbass of the Year" award. This was a hard one to pick, but in the end, I have to again give it to Reggie for still not releasing enough Wiis to meet demand, a fact made even worse this year with Wii Fit. When you consider that a lot of upcoming Wii titles (including Shaun White Snowboarding and the previously panned Wii Music) support the use of the Wii Balance Board, wouldn't you at least make an effort to MAKE MORE UNITS TO MEET DEMAND?

And what was up with that E3 press conference? I never thought I'd see the day that Sony's 2006 conference would ever be eclipsed! Oh, and to put the icing on the cake, nice way to stiff your hardcore gamers. Even offering 2009 releases such as Sin and Punishment 2 and Punch-Out aren't enough to win me back.

Ok enough with the bad, it's time for the good. Let's start with the "Golden Microphone" award, which I give to a game with the best voice acting, and who else could win but Metal Gear Solid 4: Guns of the Patriots? The series has always had a good voice cast, but this year it was taken to a whole new level. David Hayter IS Snake, and what else can I say about him. While he has told me he doesn't do voice acting any more, it's still great to see him return to the role that made him great. Debi Mae West returning as Meryl was a treat to hear again, and for once Spike was dead on about giving her their VGA for Best Human Female Performance. As for Raiden? We'll get to him later. I have a lot more to say about him.

I had to apologize to a lot of developers this year because my expectations were real low but they ended up surprising me in the end. Rockstar North went above and beyond with GTA IV, and Media Molecule completely took me by surprising with the addicting LittleBigPlanet, but Treyarch suffered my wrath far too long. When I heard they were going to publish the latest Call of Duty and return it back to World War II, I accused them of complacency and going back to a safe environment for a quick cash in. Was I ever wrong. Having access of the COD4 engine helped to make World at War an intense game, and the Pacific theater made the game completely new. In fact, it was the game that Medal of Honor: Rising Sun should have been, and as a result, Treyarch is getting my first ever "I'm Sorry" award.

Now with getting a PlayStation 3 earlier this year one aspect I do not like is the mandatory installation for some games. Not only does it eat up space on my 80 GB hard drive, sometimes it takes forever when I just want to get right into the game. However, considering Metal Gear Solid's eight minute install, they decided to make the loading/installation screen interesting, and maybe even funny. Showing Snake smoking cigarettes nonstop we are given information of how to play the game, safety recommendations, and even telling me if I've been playing way too long. It almost reminded me of the great Dungeon Keeper 2. I almost thought I heard that evil voice saying "go to bed" again. It was just the start of what turned out to be an amazing game and worthy of a new award for the "Coolest Loading Screen"Ever!"

Now back to Raiden. If this was 2001, when Metal Gear Solid 2 came out, he might have received the Dumbass award. The character was a whiny, annoying effeminate who liked prancing around naked. All I can say is how times have changed. I should have known the E3 2006 trailer was a sign of things to come, because in MGS4, Raiden has become a certified badass. Whether it was slicing through an entire army of Gekko Metal Gear units, fighting Vamp on top of Metal Gear Rex, or fighting an entire army of Liquid's FROG army (with NO ARMS,) Raiden has done a complete 180. Just like he said in the game, "Jack is dead," long live Raiden! No one else ever came close to getting the "Badass of the Year" distinction, and it is well deserved. Kojima, thou art forgiven!Finally, there is the highest honor of the "Holy *#%@ Moment of the Year," I'm talking that one rare moment that caused me to stare in disbelief and not expect it to ever happen, or see it coming. Last year, ALL of Call of Duty 4 got the honor because there were way too many amazing moments. That almost happened again this year with MGS4, but I couldn't just give in like that again. Sure there were all the awesome Raiden moments I mentioned earlier, the Rex vs. Ray shootout, the surreal return to Shadow Moses Island, the ending fight between Snake and Ocelot, and the "Marry Me" scene with Meryl and Akiba, but in the end the ending scene just floored me. Thinking that Snake came through in his suicide attempt, we find out he didn't do it, and was greeted by a familiar voice. We then see someone we never thought we'd ever see in the game".FREAKING BIG BOSS! Not only does he explain the whole origin (finally!) of the Patriots, but he ends up reconciling with Snake, only to end up dying at the original Boss' gravesite due to FOXDIE.

Still the honor of "Big Boss Lives!" (At least for a short time) was what won the honor because even at 4am when I saw it, it still shocked me.

Well that's it, the special awards for the past year. However, to find out what my top and bottom five of the year are, as well as my co-host's, you will need to listen to our latest podcast.

Waiting For: The upcoming 2009 Lineup