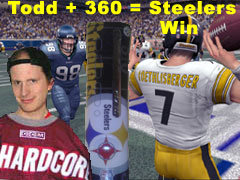 In the last two years, I started a new tradition to my commentary. Using Madden as a test source, I started the Hardcore Bowl, as a method to predict the winner of the upcoming Super Bowl. Each time I did the Bowl, the Patriots were the clear winner, and the same results occurred in the last two Super Bowls.

However this year, with the release of Madden 06 on the Xbox 360, there was a small problem. Being that this version was created from scratch instead of porting over to the 360, many features of past games were left behind. Madden Cards, Owner Mode, and Superstar Mode were among the items MIA, but what really hurt me the most was the inability to let Madden 06 play a demonstration game.

To sum up, there will not be a Hardcore Bowl III. But that still will not prevent me from backing up a winner. This year I will be backing up the Steelers due to a long lasting connection with the team.

To start off, I have been born with Steeler blood. My late mother was loyal to the Steelers right to her dying days. Since I was seven years old, we always took a summer trip to St. Vincent's College in Latrobe, Penn, their training camp. In addition, I was a regular visitor to Three Rivers Stadium since I was six years old. Granted it was more to see the Pirates than the Steelers (I didn't attend my first Steeler game since a preseason game that took place when I was in college), but it was a treat to see a live game.

I even grew up listening to the live broadcasts on local radio. Nothing made me laugh any more than listening to the high-pitched, yet raspy, quips made my loyal Steeler broadcaster Myron Cope. When I moved away from the area ten years ago, I wasn't able to hear Cope again, that is, until a wonderful technology called satellite radio came into play, and I was able to hear his hilarious quote again. Cope retired in 2004, but just hearing him one last season was worth the money.

And then there was 1996, the last year the Steelers were in the Super Bowl. It was also the last year in my late mother's life. Seeing the Steelers make it to the big game was one of the highlights in her last few months, but after Neil O'Donnell threw two passes right to eventual MVP Larry Brown, the signs of hope easily faded away. She passed away that August, and in her memory, my brother and I took a cabinet full of her Steelers and Pirates merchandise, and made it into a shrine.

Even with moving to the DC area, I still make it a tradition to head to Pittsburgh in April, during the first Wednesday game of the Pirates baseball season. Three Rivers Stadium may be gone, eventually replaced by both PNC Park and Heinz Field, but where Three Rivers stood, I always stand there for a moment of silence.

I even started my return to training camp last year. Who would have thought that one single trip would have resulted in the Steelers making it back to the Super Bowl exactly ten years after my mother passed away? Even despite Jerome Bettis nearly fumbling the entire game away, the fact that Mike Vanderjagt suffered the worst case of "Wide Right" that I have ever seen proved that I provided the Steelers with my own version of karma.

And this will all come to an end this Sunday. I will be watching the game from my favorite sports bar, as I have done in the last five years, and I will be hoping that the Steelers beat the Seahawks by a score of 31-21. Should this become a reality, even if the Steelers win by a 1 point margin, I will be heading back to my mother's gravesite and decorate it with tons of Steeler memorabilia.

Don't let me down, Big Ben!