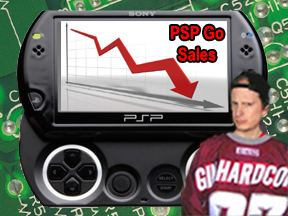 What is Sony thinking?

Why mess up something good like the PSP? Since its inception, I have owned two PSP models – the original 1000 and the Slim/Lite 2000. For the most part, I enjoyed playing with both. It might have been big compared to other handheld systems (ie the DS/DS Lite/DSi and the iPod touch,) but it was better suited for the hardcore crowd.

I didn't care that it didn't have a touch screen, or that the WiFi was only the slower Wireless-B (which actually was a moot point for online gaming, considering a majority of the PSP games only supported ad hoc gameplay.) It was just my preferred handheld for many games, and a great way to play the classics again, as well as those that originally never came out to the States. (Gradius Collection or Castlevania: The Dracula X Chronicles were always in my UMD drive.)

Now, when Sony updated the PSP to the brighter screen 3000 model, it made sense to the consumer, and for an upgrade it would make a lot more sense to PSP owners. But of course, we all know how Sony is. They want us to keep spending money and will think of strange ways to make that happen.

And with that, enter the PSP Go. Not content with just having the PSP model we know and love available, Sony decides they should come out with a newer model that strips gamers of the possibility of upgrading.

By removing the UMD drive, not only does this ruin software retail, but it also prevents current PSP owners from playing their currently existing UMD-based games. Not only that, but it will also affect trade-ins. Think about it, are you able to trade in a game that was digitally downloaded? Good luck doing that.

While we're on the subject of trade-ins, how will this affect retailers such as Gamestop? Surely with the PSP Go, you can kiss trade-ins goodbye. Let's not even think of how they will not be able to sell any PSP software. The only way they can make sales of the PSP Go, hardware sales notwithstanding, is from purchases of PlayStation Network cards, and from the vast number of cards I have seen (which equals NONE,) there will be no revenue from the system at all!

The price point is also a joke. Why offer this crippled system at $249 when the much better PSP 3000 is available for a more palatable $169? Is the 16GB of internal storage really worth an additional $80? Not at all when you can purchase the same size Memory Stick Pro Duo from buy.com for only $60, and still have the same firmware (upgradeable via the Network Update) while being able to play ALL your UMDs, something you won't be able to do with the Go. If only they could have come up with a great idea of being able to trade in your UMDs to get a digital distribution copy of the same game"

Oh wait, they had one in the works"AND THEY CANCELLED IT! Way to go Sony. Apparently you don't want us to play our currently existing games on your new system.

You already butchered the PlayStation 3. First you take out the Graphics Synthesizer, making it software based, and then you kill compatibility altogether by removing the Emotion Engine. "It Only Does Everything?" If there was any case of misleading advertising, there you go!

Still, getting a PS3 Slim is still only $50 more than the PSP Go, and you'll even be able to watch Blu-ray movies with that, another thing that cannot be done with the Go. Either way, I do not know what Sony was thinking with the PSP Go. Maybe they are thinking that since Apple is doing great with their digital distribution via the iPhone and iPod touch with the App Store that they can follow suit, but look at the difference between the two.

A majority of the apps that are downloaded are free, and the ones that are retail, for the most part, don't sell for more than $5. I won't be able to say the same thing for new PSP Go downloads (especially when you consider the UMD versions go for as high as $40. PSP Minis would go for much less but still won't be as cheap as the App Store.) Analysts such as Michael Pachter are already calling it a failure, and overseas retailers are not even selling it because of being "digital distribution" only. I even met a retailer who told me he only sold one unit.

Sorry Sony, the PSP Go is on the point of being an Epic Fail. I might be talking Rock Revolution quality Epic Fail. Personally if I had that much money, I'd just add another $50 and buy myself a PlayStation 3. Then again, I might just save that money to cover all the new games coming out this year and the first quarter of next year! PSP Go? More like a PSP NO!