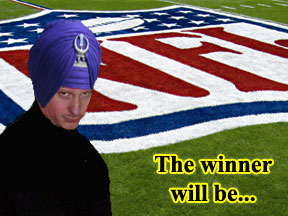 It’s Super Bowl time again! Oh wait, I’d better say it’s Big Game time again. We don’t want the NFL coming after me for infringing on their intellectual property, which admittedly is getting out of hand. After all, they also tried to copyright the term "The Big Game" but eventually backed out of it. As if their demand of limiting viewing the game to televisions under 55 inches in screen size isn’t insane enough.

Oh well, let the NFL come as far as I’m concerned, because it’s time for my annual Super Bowl prediction. The past few years since resurrecting the Hardcore Bowl I made a play-by-play description of how the game turned out. And of course there were always moments of controversy. Who could forget two years ago when I officially lied about Nate Washington making that game winning catch at the last play when actually he didn’t? But then, in an ironic twist, Santonio Holmes DID make a game winning catch in Super Bowl XLIII.

Then there was last year’s Hardcore Bowl, a 17-10 Saints victory. While it was nowhere near the 31-17 win the Saints experienced for real, it did feature a key similarity with my prediction: Peyton Manning’s tendency to throw interceptions at the worst possible moments.

Hardcore Bowl 2010 featured 3 of Peyton’s famous picks, but was nowhere near as bad as the real Big Game. Although he only had one pick, it was a costly one: a 74 yard return by Tracey Porter to seal the victory for New Orleans.

Hardcore Bowl 2011 is also the first time I featured in-game highlights that was posted on the GamerGeeks on Demand Youtube page, to show there was no sign of any in-game tampering whatsoever. Still, despite the video footage revealing the truth, I received a ton of hate mail from Colts fans over the Manning interception footage. Sadly the truth hurts. Just ask Tracey Porter.

This year, my coverage of the Hardcore Bowl is going to take on a new spin. Rather than providing play-by-play coverage during a column, for the first time ever the entire Hardcore Bowl will be on video in its entirety. As always I will feature the rules that I have used in years past.

Quarter lengths will be for the first time, a full 15 minutes. There will be a 25 second run off between live plays.

Past Hardcore Bowls did not feature many penalties, which is common in Madden at its default setting of 50%. This year the setting has been raised to 60%.

A first for Madden 11, this game will be played in Super Bowl XLV mode. Time and weather is determined by the game mode. However, by having the CPU play both teams, the setting is set to the home team (in this year’s case, Lambeau Field.) To place the game in its actual location (Cowboys Stadium, Arlington TX) I had to set control to one team at the coin toss, but still let the computer decide. However, before kickoff, the control was set to CPU for both teams.

Finally the most controversial rule will involve Steelers center Maurkice Pouncey. Due to a high ankle sprain his status has changed from doubtful to questionable. However Pouncey himself has stated there is a 75 percent chance that he will play. Thus he has been added to the Steelers depth chart.

I know that my prediction will once again draw controversy and I’m looking forward to the turnout. To check out Hardcore Bowl 2011 in its entirety, go to either Space Monkey Mafia Studios or directly

to the video link. We’ll have to see if my prediction again has any accuracy. If so, I might put money down on next year’s game.