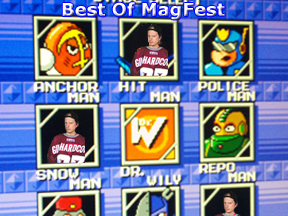 Gaming Show Will Rock You (literally)

I'm sure a lot of you wanted to ask me why I didn't write a piece for last years VGXpo in Philadelphia. Simple. I didn't even consider attending. After all, in the last few years the event has fallen into jump the shark territory. The number of games on display are much smaller, they don't have 24-hour gaming nights, there are no late night events as promised, and worst of all, it was moved to a much harder-to-reach location. To me it just wasn't as fun as it used to be, and as a result, not worth attending.

Another reason I didn't attend VGX is because I had heard of another event that was actually closer and more accessible. Rather than having to travel to downtown Philly, I only had to drive to Alexandria, Virginia to experience MAGFest. Already I knew this was going to be much better.

And then I finally got to the Hilton Mark Center, and after getting my registration completed, I noticed immediately that it was better. The first event I attended was a New Year's Eve concert held by many game related bands, hosted by of all people, Stuttering Craig from screwattack.com. MAGFest is known for being more centered on game music, and by having concerts like this during the entire four and a half day event is a great way to get that point across. In all, there were 20 bands that performed, including Arm Cannon, Metroid Metal, The One Ups, and Brentalfloss.

While MAGFest officially started on New Year's Day, having the previous night's event for pre-registered attendees was a great way to get a head start on what was on display, at least in terms of which games were available to play. The arcade display was more varied than what I experienced at VGX, even going as far as having original Japanese sit down arcade machines never before seen in US arcades. Some were even set up to go head to head, such as the one used for Street Fighter Alpha 3.

However it was also the same machine where I got my tail handed to me by Stuttering Craig. I'll make sure never to go up against him again.

Inside another game room, it was more centered towards console gaming, going as far back as the 2600. I was happy to see there were a lot of Dreamcast consoles on display, considering that it was a console I treasured so much, as shown in my past comments.

Music based games were also played on huge displays projected onto bed sheet-covered walls, but thankfully they were still visible for the most part. I even had a chance to experience the much coveted Ion Drum Rocker for Rock Band 2. Unfortunately the unit kept falling apart and needed constant maintenance.

I was also surprised to see a huge selection of music arcade games, including Beatmania IIDX 17 (Sirius,) a dual unit of Guitar Freaks and Drummania V6, Keyboardmania 3rd Mix, and even an imported Taiko no Tatsujin 10 (aka Taiko Drum Master in the US.) For me to play these games, I would originally had to travel to California, so having them close to me for a change was a breath of fresh air.

But for me, the best part of the game rooms"was they were open 24 hours! Talk about an experience that I sorely missed from VGX! It was almost as if the MAGFest staff read my criticisms of their rival and took them to heart.

Of course there was more to MAGFest than just playing games. One room in particular showed non stop gaming related movies and online videos. There of course was the usual fare of bad game based movies such as Double Dragon, Super Mario Bros., and of course, The Wizard. But there were also more successful fan based movies from the X-Strike team (Project Snake, Resident Horror, etc.,) the upcoming Mega Man, and all three DVDs from the Angry Video Game Nerd. The Nerd's presentation in particular obtained a lot of interest from fans, as they even went as far as singing the main theme when it started, not being aware they were playing the extended version to start off.

Special rooms were also made available for tabletop and card games, and there was even a room dedicated to LARPers (Live Action Role Playing.) Sadly I didn't get to see much of the LARPs in action, because I really wanted to see if anyone would have the dignity to even recreate the infamous "Lightning Bolt" or "Magic Missile" Youtube videos.

But by far the best part for MAGFest was the panel and Q&A discussions I attended for two key speakers. The first was the voice of Duke Nukem himself, Jon St. John. Not only was he a very hilarious person to listen to, he was very accessible to fans and offered to make special recordings to them as Duke (for a small fee, of course. This is a business after all.) Not to anyone's surprise, the biggest question he was asked regarded Duke Nukem Forever, which he actually couldn't comment on, but he told everyone to "read between the lines." What that means is yet to be seen.

The other must-attend panel for me was hosted by the greatest game designer of all time, Sid Meier of Civilization and Pirates fame. Just like St. John's session, it was a very informative and entertaining session, going back to know more about his greatest franchises, alerting me of an upcoming version of Civilization for Facebook (which unlike other dreck like Mafia Wars, I will definitely play!)

Sadly he also said he can't work on another great (and underrated) series, Alpha Centaui, due to the fact that the franchise's name is the property of Electronic Arts (whose name resulted in a loud chorus of boos.) In all, it was an entertaining hour for all those who attended. And for those who missed it, the Sid Meier Q&A session has been posted on YouTube courtesy of GiN.

Needless to ask, but did MAGFest do enough to make me forget VGX for good? Most definitely. The end result was an amazing few days to start off the New Year. The setting is much better and more accessible, the games were more varied, the speakers were entertaining, and the whole event was just so darn fun.

For VGX to win me back, they will have a huge uphill battle, though a courtesy suite and free meals would be a good start. We'll see what they come up with come October. After all, I really could go for a "Whiz With" and a "Provolone With" over at Geno's.

Waiting For: Army of Two: 40th Day (360, if the lazy mailman will ever send me my copy from Gamefly!)