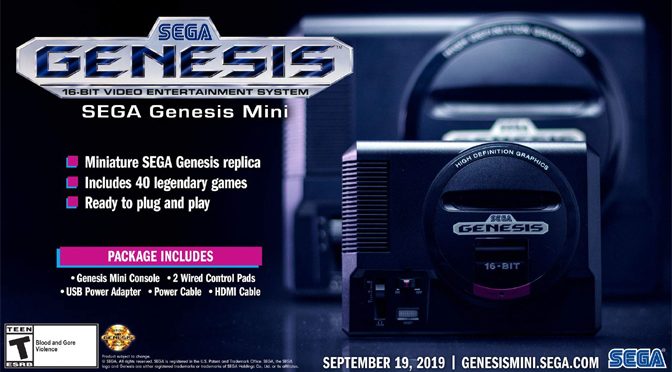 You know, this last month has taken a heavy toll on me. As you all know, I moved back to my previous location, but last week the move suffered a setback as I had a serious accident. While moving some heavy equipment, I ended up falling down a flight of stairs and hitting my head against a wall. The good news is I ended up only with a couple of cuts and bruises, and a lot of soreness, but it could have been a lot worse.

But even with the move, there are some things that got better for me. For one, because of my security deposit being refunded I ended up with a nice little bonus by the end of the move, and with that move I decided to get back on the PS4 train and am finally trying out both God of War and Spider-Man, with plenty more on the way. But I also made sure to put some money aside for another console I wanted to get when it was released, and today as I write this the day has arrived.

That console is the Sega Genesis Mini. When I was in college, I grew up a Sega fan, and it all started with the Genesis. Sure the Super NES might have looked and sounded better, but it was the faster processor and better sports games the Genesis offered that won me over, not to mention the best versions of the NHL series that I still play to this day on my Xbox. In addition, there were a lot of games on the market that were on both systems that ended up being better on the Genesis, and a YouTube series I recommend is called Console Wars that shows this point quite well. Take a look for yourself:

From the moment I bought my Genesis up to when I upgraded to the Saturn, I amassed an impressive lineup, which continued on via emulation. But after the success of the NES and SNES Classic Editions (albeit their original scarcity) I wanted to also get a mini Genesis. Yes there were mini Genesis consoles before, but they were developed by a company called AtGames, and they had a bad reputation, particularly with the sound emulation. Thankfully this time Sega listened to the criticism, as a far superior emulation studio, M2, is behind the Genesis Mini.

As for the game lineup, the 42 games included are for the most part, quite good. Sure there are some that got me scratching my head, and other releases of the same series that I would have preferred, but for an initial lineup I’d be ok with that.

[amazon asin=B07PFT19MG&text=Don’t let Todd have all the fun! Grab a Sega Genesis Mini for yourself from Amazon today!]

BUT, that’s where hacking comes into play. Sure there are no hacks for it, and yes I know there will be the usual “just get a RetroPie” broken records, but after my impressions with hacking the NES and SNES Classics, I’m ready to add more games to the Genesis Mini, and even came up with a list of 10 games that should be added once it becomes hackable:

If there was one company that really pushed the Genesis beyond its limits, it was Treasure. They already have three masterpieces on the Mini (Gunstar Heroes, Dynamite Headdy, and Light Crusader,) but they can always add more. Alien Soldier didn’t come out in the US in cart form as it was a Sega Channel exclusive, which is a shame because it is a gorgeous game with large boss characters, in fact that’s all this game is: one huge boss rush. 25 bosses in all, and one of them is actually SEVEN forms in one, similar to the Seven Force we’ve seen in Gunstar Heroes!

I never had a chance to play this game on the Genesis because the cart was quite rare even back then (and now a complete copy can draw thousands of dollars in the resale market,) but I really want to Not including it in the US Genesis, but having it only on the Japanese Mega Drive Mini really hurts. I would even take its Sega CD spiritual sequel, Robo Aleste as it’s just as good.

During the height of the mascot craze, Konami had their own version with Sparkster in a fun little side scroller that featured some impressive graphic features such as reflective water surfaces. They could have also added the sequel, Sparkster, and I’d be fine with that, even though I favor the SNES version. Then again that one was a hybrid of the original RKA.

Sure the Genesis Mini already has Street Fighter 2: Special Champion Edition and Eternal Champions, but I would have gladly replaced the latter (as it is a dull fighter and its Sega CD sequel is much better) with Ultimate Mortal Kombat 3. I get it is probably not on there due to licensing issues but many of the recent AtGames Genesis consoles had it included, so why not the M2 console? Plus, just like with the other two games, this screams for a 6-button controller, which I wish was bundled with the Mini. Thankfully Retro-bit has a decent 6 button controller available separately.

Originally overlooked when it first came out, Herzog Zwei is now considered a precursor to the real time strategy and MOBA genres. It was very advanced for its time but still a lot of fun to play, and even exists today as a spiritual successor called AirMech: Arena. And of course, this was from TechnoSoft so expect amazing Genesis tunes to go along with all that warfare.

While on the subject of Technosoft, we are getting Thunder Force 3 on the Mini. While it is a great choice, I would have gone with its far superior sequel, Thunder Force IV, which is considered by many to be one of the best Genesis games ever. Anyone who has ever seen the Strite stage with all of its levels of parallax scrolling knows what I’m talking about. But if they did bring it here, I would have stuck with the original name, and not the butchered name of Lightening Force that Sega gave it in its US release.

Sonic and Sonic 2 are in the Mini, but why not finish the collection with Sonic 3? It was the first Sonic that introduced us to Knuckles and continued an amazing series. But there was also its spinoff, Sonic and Knuckles, a game that was unique in its own way because of how you can attach both Sonic 2 and Sonic 3 to change those games into something new. I would have loved to play all of those here. Oh well.

Yes, Shinobi 3 is included but I actually liked Revenge a lot more. Why you ask? Two words: Yuzo Koshiro! Revenge was the first soundtrack I heard from him, and it is still as good as ever today, especially the China Town track. If Koshiro was in Shinobi 3, I’m sure I’d enjoy it a lot more.

As for the last two games, I’m going to cheat a bit and go into Sega CD territory but they need to be mentioned.

Another Holy Grail title that costs a ton of money in its original form, but this was Hideo Kojima before making games about delivering fetuses. This is a digital comic/novel graphic adventure about robotic beings taking over the bodies of those they kill off. Seems simple but the plot is quite deep, and told to perfection with some excellent (for the time) voice acting. In fact, this is the only version of Snatcher to be recorded entirely in English, hence the high cost of the disc. I would give anything to play it again on the Mini. Hakchi, make this happen. Please?

Let’s go back to the SNES launch, and how their fanboys gloated at Sega for having Final Fight as an exclusive (for the time.) But what did they get? A butchered port with only 2 of the three characters, one stage missing, and of course, no two player gameplay. Imagine their shock and horror when the Sega CD version was released with nearly everything intact? I had BOTH this and Streets of Rage 2 at the time and both earned equal play time as they were both so good. Hopefully a hack will allow me to add Final Fight CD to the collection.

Still, until it becomes hackable, I will continue to enjoy my Sega Genesis Mini and it will be placed right next to the NES and SNES minis, as well as my C64 mini in front of my television. But I do hope the hacking becomes a reality soon. I can’t wait!

Waiting For: The Outer Worlds