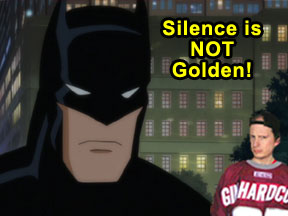 Game Voice Acting Takes a Turn For the Worse?

A few weeks back, I made a strong complaint about the fact that David Hayter was not asked to return for Metal Gear Solid 5. It’s obvious that I was not happy about the way things have been going with the MGS series, and losing the iconic voice of Solid Snake was a huge blow to me.

However, there were some of you out there who said I was whining about the voice actor change, that it does not mean anything, and that I need to "grow up" and "get over it."

Get over it you say? GET OVER IT? Never.

How would you feel if there was a character you grew up watching or playing suddenly had something as iconic as his voice change? What if a beloved series you have followed since you started gaming suddenly made a change for the worse?

(Pulls out a copy of Final Fantasy XIII) Oh wait, that happened!

Yes that was good example to use, and no I’m not using that as part of my Final Fantasy hate wagon. I’m just showing everyone how some elements of a game or character mean so much that anything that changes it could ruin the whole formula.

And once again, for those of who you don’t understand why I’m mad at David Hayter’s absence from MGS, maybe you better let these next words seep in: KEVIN CONROY IS NOT RETURNING FOR ARKHAM ORIGINS!

Question. How many of you know who Kevin Conroy is? That’s right, he has been the voice of Batman since the 1990s Animated Series, and from what I can tell, he’s the best voice for the Dark Knight. His performance in the first two Arkham games, along with Mark Hamill’s Joker, were one of the highlights of a great series. Yes, I know Mark Hamill announced before Arkham City that it was his final role as the Joker, but in the end it was an amazing swan song for him. So that will easily put any cries of "double standard" or "hypocrisy" to rest.

But for Conroy, what will we hear from him? Sure, he is credited for playing Batman in Injustice, but as I’m waiting to review the game myself, I cannot confirm nor deny that he is in it, nor if it he is as great as in the Arkham games. I really hope he is so I can have something to remember him by. And do any of you remember when Tara Strong replaced Arleen Sorkin as Harley Quinn in Arkham City? It did not sound right at all. Look, don’t get me wrong. I know Tara Strong is a highly talented voice actress, but when you take a voice that people are used to hearing for over 20 years and change it , you know there are going to be disappointed fans.

But getting back to the new Batman voice and the reason for the big change, apparently it’s supposedly due to Warner Bros. Montreal wanting to feature a younger version of Batman, and the voice change is part of that. Sorry, I’m not buying it. Will it prevent me from playing Arkham Origins when it comes out? Probably not. However, not featuring the well known voice that we have grown up with isn’t going to score many points with me or any of the hardcore fans of the series. I shudder to think if someone will end up emulating Christian Bale’s raspy voice for the new Batman. Let’s try not to think too much about that possibility.

Waiting For: Injustice (Still featuring Kevin Conroy from what I can tell, since my copy still hasn’t arrived yet!)