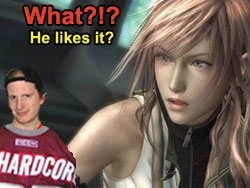 Final Fantasy. Just the name alone gives me nightmares. It easily makes me the target of many a fanboy, but I always had my reasons why. Whether it was the random encounters that take place at EVERY STEP, Chimeras in the first game whose only attack consisted of the word "CREMATE," the constant grinding in FF VI (III in the US) the sidequest overkill, and of course, that dreaded unskippable Super Nova attack in FF VII, or the overkill of FMV in all the later releases, Final Fantasy had plenty of reasons for me to hate it.

Now when I played Final Fantasy X, I do admit there were a lot of factors that I felt were quite positive. For starters, the combat system was quite good. No longer did I input a move and wait an eternity for my character to execute it, eventually waiting for another Cremate or Super Nova ambush; he performed the move on instant. In addition, it featured a queue that shown who would get the next attack and most of the time kept the order intact. A life meter also shown for boss battles, so now the series could not claim that the bosses had infinite life. It was a vast improvement combat wise.

I also liked the way FF X handled the characters’ leveling up. Characters boost their skills via a sphere grid, allowing you to decide on what boosts you want to give each character. Nice way to add some freedom of choice.

Too bad I couldn’t say the same thing about the story, or in particular the characters. While some characters such as Auron and Jecht were tough S.O.B.s that I wouldn’t mind seeing more of in the game, the lead character Tidus fit the usual whiny spiky haired emo stereotype the game was known for. And don’t even get me started on the fan service characters such as Rikku, who the game (and its sequel X-2) decided to dress up as inappropriate as possible, despite the fact she was only 15!

Still, FF X was a step in the right direction, but still wasn’t enough to make me a fanboy. After all, XI became another one to join the MMO bandwagon, and I never even touched XII.

Needless to say I had no interest in XIII, even with it coming out on 360. Still, just for fun, and the possibility of doing another audio review/ripping on GamerGeeks, I added Final Fantasy XIII to my Gamefly Q. But last week I sent back a previous title and despite still having Bad Company 2 out, I received a text saying "Final Fantasy XIII (Xbox 360) shipped out on 4/XX/10 from PA." My response was a quick "NOOOOOOOOOOOOOOO!"

Many of my Facebook friends, and even my cohost were asking me "Why? I thought you hated Final Fantasy?" Even I asked it myself, but as I said before, it might make some good fodder for ridicule. So last Monday the game arrived, and after holding off until late that night, I put it into my 360. Of course when I start it off, it began with the usual FMV overdose, but this time I decided to give it a taste of MST3K style commentary, wondering why they are on what appears to be a suicide train, and why the guy who looks like Shaft has a bird in his hair? I guess having a dodgeball player with a massive cowlick of Ed Grimley proportions wasn’t bad enough. So yes, I kept making fun of these events and dreaded seeing how the first battle would work out.

Then it happens. First of all the character Lightning was not flailing her arms around and whimpering the same way Tidus did. A quick tutorial later that seemed simple and to the point (meaning no drawing magic or junctioning attacks) helped out. The combat was fast and simple, and the best part, I could actually SEE my enemies before the battle began. At times it felt almost like Earthbound on the Super NES, an RPG that deserves more credit than it got. Eventually more tutorials came that showed the finer elements on using auto-combat, techniques, paradigm shifts, and even battling Eidolons to earn their respect. It never got tiring.

A lot of people whined about the fact that your characters’ health automatically is filled after each battle, and that you only control the leader. Truth is I’m glad it does both. It actually streamlines the game and improves on its pace. I’ve always hated how combat in the Final Fantasy series was slow, and having the unskippable attacks in FF VII was horrible. This is a vast improvement.
Dare I say…I actually LIKE the combat in Final Fantasy XIII?

And dare I also say I like the Crystarium as a method of leveling up? It’s almost a dead ringer of X’s Sphere Grid and while most of the improvements are on a linear track, it does branch out for certain moves so I can decide if I want them or not.

However yes, I do have some issues to deal with, and they mostly deal with the same issues I had with FF X. Hope, when I first started, is almost a dead ringer for Tidus, spiky haired, whiny, emo type. While he got on my nerves at first, at least it’s starting to let up. The same can’t be said for Vanille. Her voice just irritates me, way too upbeat, and the way she runs just creeps me out…isn’t she also 15 just like Rikku? Oh well, at least her weapon is pretty cool. I do admit I like Sazh, even with the bird in his afro, and Snow and Lightning are both pretty tough fighters.

I just wish I could play more as Snow though because the last few hours I have seen him, he has been in too many cutscenes lately. And that’s my other big issue with the game…all the damn flashbacks! It seems that every time I go to a new area it takes me back to Day 11. I just want to get back to the action, and then these cutscenes just draw me away.

I have been told by everyone the first 10 hours just drone on and then the action builds up. Before writing this, I passed the 10 hour mark as I am on the second disc, chapter 6. I guess I’ll have to see if they are right because much to my surprise, I’m liking the game so far.

I’m sure I won’t be saying the same thing about Final Fantasy XIV, since it’s going to be another MMO!