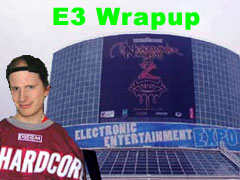 Two weeks have passed since I was at E3. Since then I have been collecting as much information that I missed, as well as all the info I obtained from all my meetings. As expected, this year's E3 turned out to be one of the biggest yet. With the launch of two new consoles, as well as the second generation titles for the other console, there was a lot to go over. Each of the big three had a lot to show, and here I will provide my own take on each of them.

SONY: Of course the big talk from Sony was about the PlayStation 3. In my opinion, the PS3 was a major disappointment. It started off bad enough when Sony announced the pricing structure before I even flew out: $499 for the 20 GB model and $599 for the 60 GB model. I thought that was bad enough, but later on I found out that the 20 GB model will not have Wi-Fi, memory card slots, and HDMI video output (thereby prohibiting 1080p resolution). Sony later made a claim that the 20 GB model will be upgradeable, but not in terms of the HDMI. It seems that Sony is not caring for the customer with this price range and lack of upgrading.

As for the games themselves, I wasn't at all impressed. I played Gran Turismo HD, and all it looks like is GT4 with higher resolution textures. I also noticed that GT finally got over their six car limit, but it is still no where near the 43 that EA Tiburon can do with NASCAR on the PS2!

Warhawk looked impressive, and was the only title that really showed off the tilt sensitive features of the PS3 controller, which now looks like the Dual Shocks of PS controllers past. Obviously the Batarang concept was not approved by PS2 fanboys.

And as for Metal Gear Solid 4, even I, perhaps one of the biggest Metal Gear Solid fans out there, was not impressed with how the trailer ran. Sure the story looked impressive, but the horrible frame rate issues proved to me that the previous TGS trailer was not running on actual PS3 hardware. In the end, Old Snake had the best reaction to the PS3's performance: he ends up putting a gun to his mouth.

At least on the bright side, Sony had the guts to have PS3 titles open on the floor, unlike some other companies that I will mention later.

The PSP had a strong lineup on display. One of the titles I'm really looking forward to is a 3D update to the classic Ghouls ‘n Ghosts series. The game ran real well, and giving Arthur a health meter and the ability to respawn where he dies gives the game a much needed breather from the insane difficulty the series is notorious for. More PSP games are announced that should take advantage of Wi-Fi, but I only hope they actually allow infrastructure mode. There are too many games that are Ad-Hoc only.

I will mention one trend that Sony had at their booth for the PSP that I will love to see continue. There were actual download centers that allow PSP owners to download games via Ad-Hoc to their consoles and play them without having to wait in line. It was a very smart move by Sony and I hope that future E3s will follow the trend.

On the PlayStation 2, there wasn't much that I saw much interest in. The only game that really wowed me was Guitar Hero 2. Since I loved the first game, I can only imagine how much I'll enjoy the sequel. From what I've played, I can tell it will be a true hand killer. Try playing War Pigs, which goes for almost eight minutes, and you'll see what I mean.

NINTENDO:
I can't really comment much about Nintendo because like they did with the DS two years ago, they wimped out and hid the Wii behind closed doors. Why must they do this? I thought that with the first two hours of the show being open to press only, that we wouldn't have to go through this again. It looks like however, that the Wii turned out to have a better reception than the PS3, particularly with the use of the Wii-mote controller.

I still can't get over the stupid name, but if what I read about the Wii and it's funky controls are any indication, I will have to take a look into it. Even better, rumors are stating that the Wii will sell for about $200. Considering the insane price range of the PS3, this is a major sigh of relief. Heck I might have the Wii on my pre-order list this holiday season, but I will have to get some hands on first.

MICROSOFT: With the launch of the 360 behind them, Microsoft can now concentrate on enhancing their console. To start off the lineup of 360 titles for this holiday looks quite impressive, including some big hits such as Too Human, Lost Planet, Alan Wake (announced as a 360 exclusive,) and a little masterpiece called Gears of War. And at the Microsoft press conference, Peter Moore made a surprise announcement: that Grand Theft Auto 4 will be released for the 360, thus ending the original agreement that it would come out for Sony's console first. Even better, the 360 version will also feature exclusive episodic content that will be available on Xbox Live. Just that alone might make me forgive Moore for what he did to Shenmue II on the Dreamcast.

And let's not forget a little announcement regarding Halo 3. The teaser might not have made any major surprises, but it was amazing to watch, and was even made available as an Xbox Live download. Microsoft allowing all of their trailers and demos to be available on Live for free was as smart a move as Sony offering PSP download stations.

While on the subject of Live, Microsoft's other huge announcement came in the form of Live Anywhere. Now in addition to being available on Xbox 360, accounts can now be accessible both on Windows PCs and on Windows Mobile enhanced cell phones and PDAs. When at my meeting with Microsoft, and I gave my gamertag out, seeing all my listings on a mobile phone was shocking, right down to how many achievements I had made in Oblivion. It was a little intrusive, and might lead to some privacy issues, but it is still quite impressive to show off.

Lastly there is the subject of Live Arcade. With the release of key social titles such as Uno (which is now currently available for 400 points,) arcade classics such as Contra, Super Contra, Time Pilot, Scramble, Galaga, Pac-Man, and Street Fighter II, and an amazing Live version of the PSP classic Lumines, Live Arcade looks like it will be better than ever.

CONCLUSIONS: In the end, Microsoft seemed to be the true winner this year. Providing a very strong software lineup, integrating Live to PCs and Mobile providers, and amazing new Live Arcade titles, Microsoft is taking both 360 gaming and online gaming by storm.

Nintendo has potential with the Wii, but I will need to see it for myself to make a final decision. Note to Nintendo: STOP HIDING BEHIND CLOSED DOORS!
As for Sony, you have an uphill climb with the PS3, and in regards to the $600 launch price, let me remind you something. Eleven years ago Sega launched the $400 Saturn to an unsuspecting market. At your press conference, Steve Rase only mentioned one thing: $299. Who won the console war back then? Remember what they say, those who forget the past are doomed to repeat it. And in this case, Microsoft (at $299 for an UPGRADEABLE Core system) will be cheaper than a $499 NON-UPGRADEABLE PS3.