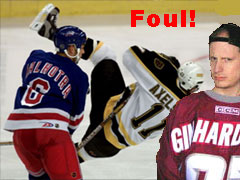 Normally I am looking forward to this time of year. After a long hot summer where my only sporting entertainment available is baseball and NASCAR (with a little WWE thrown in, but the way Raw and Smackdown have been going, that is becoming nonexistent), the fall brings back a new season of football and hockey. At first it started off quite well with football, and even the virtual seasons of Madden and (for the times I could stomach it) ESPN went well too.

I even prepared for the start of the NHL season when I picked up ESPN NHL 2K5, which turned out at first to be a better, more realistic game than their football title. However I was noticing a problem with my team having perfect goaltending. Three out of the first 10 games were shutouts, and as usual I found that to be unrealistic. The top goaltenders usually get no more than five shutouts per season. In addition, EA Sports released NHL 2005 last Wednesday, but I had some concerns with the title based on past reviews, and with the recent announcement that their lead producer was let go by EA, it caused concern.

But those pitfalls are actually nothing compared to the problems that the real NHL is suffering. Unless you have been following the NHL as much as I have, you will not be aware that there is a labor crisis involving the recently expiring Collective Bargaining Agreement.

Under the current agreement, hereafter referred to as the CBA, the average player salary has skyrocketed to almost $2 million. As a result, 20 of the 30 teams are losing money. Even the Pittsburgh Penguins were on the verge of bankruptcy until their savior Mario Lemieux bought the team and kept them in the Steel City. The largest player salary belongs to Jaromir Jagr of the New York Rangers at $11 million. I only make around $30,000 a year. If I made the average player salary of $2 million dollars a year, I wouldn't complain at all.

That doesn't seem to be the same of the NHLPA (NHL Players Association). Their player's union has been battling the league and the team owners in order to forge a new CBA. The sad news is that the owners and players want to set a salary cap, which is the maximum amount of money a team can spend on player salaries. The player's union, however, is dead set against salary caps, and will not stop until the NHL and team owners throw in the towel on a cap.

In my opinion, a salary cap would be the best way for the NHL to go, as it will easily make the game more competitive. Look at Major League Baseball, an organization that does NOT have a salary cap. As a result, only teams with high payrolls (the New York Yankees, in particular), are able to make it to the postseason while low budget teams such as the Pirates, Expos and Royals, are left with sub-.500 seasons. It too, almost suffered a strike back in 2002 but it was ironed out at the last second.

National League Football on the other hand has a salary cap. As a result, there is a strong competitive balance, and because of it, we have teams such as the Carolina Panthers. They went 1-15 a few years ago, and just last year, they reached the Super Bowl. They may have been defeated by the Patriots, both for real and on my first ever Hardcore Bowl, but to go from the cellar to the big game just shows what a salary cap can do. Even better, because of the cap there hasn't been a labor dispute in football since 1987, when replacement players were used to keep the season going.

A proposal was submitted by the player's union just last week, but was immediately shot down by the owners, saying it was a minor touch to a severely flawed CBA, and teams would still end up losing money.

What the player's union does not understand is that their excessive greed is not hurting them in general (they are protected by a $300 million lockout fund), but it hurts the fans, especially here in the US. We may have recently enjoyed a wonderful World Cup which Canada won against Finland, but we should consider that the NHL's swan song.

Wednesday at midnight signaled the termination of the CBA, and since a deal was not struck by then, the NHL and the team owners voted unanimously that the season will not start until a new CBA is approved by both sides.

So what does that mean to me? That means no annual trip to Piney Orchard (the Caps training camp), no Opening Night holiday (the first home game of the season), and no NHL Center Ice on my satellite (I'm still subscribed to it, but I don't pay a bill until the season starts, if it ever does). And sadly, if this keeps up, it might carry over into the 2005-06 season.

But as far as the virtual NHL, that too will be nonexistent. I will not be picking up EA's NHL 2005, and I traded in ESPN NHL 2K5 to help pay for a copy of Gradius V. As a result, there will not be an annual NHL report this year as well, and if a new CBA can't be approved, that will probably continue for the following year.