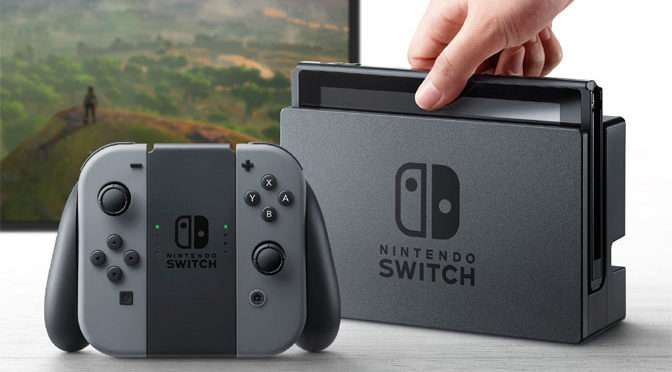 Well everyone, I’m back from a long deserved vacation. While vacation is meant to be an excuse to take time off and relax, I actually was pretty busy with other projects. Including recording more game footage to complete my long delayed Nuka World and Forza Horizon: Blizzard Mountain longplays and attending MAGFest. Now that I’m back I can finally get back to gaming, with my first task being the end of Final Fantasy XV. To think that this will be the first Final Fantasy game I may have played all the way to the end since the first game. If that doesn’t show how much I enjoyed XV, I don’t know what that is.

But I’m also back for my bi-weekly opinions on the industry, and what better way to start off 2017 than to discuss the Nintendo Switch? Yeah we’ve known about the Switch since it was unveiled last October, but last week Nintendo’s press conference told us everything we need to know about the Switch.

[amazon asin=B01LTHP2ZK&text=Grab your own Nintendo Switch from Amazon as soon as they are available!]

But at the end of the whole event, I was just left thinking, I’m on the fence about this thing. Why do I feel this way? Well let’s go over what I considered the pros and cons about the Switch. Since everyone loves to be negative, I’ll start with the cons of the Switch.

THE PRICE (WELL, SORT OF)

With the PS4 Pro currently going for $399 and my feel that the Scorpio might go for $500, I listed $299 as the maximum price for the Switch would be a possibility, and I was right. Even better, aside from a choice of colors between the Joy-Con controllers, there will not be a premium edition of the console. That is good. But what is bad is you just get the bare-bones system. There is no pack-in game, and the Switch only has 32 GB of system storage (I will get to that later on.) I would have thought that Nintendo would at least include a pack-in game. They did that with Nintendo Land on the Wii U at launch, and it was a good game to show what the U is capable of. The same thing could be said for Wii Sports, which was a fantastic pack in game! So why couldn’t Nintendo pack the Switch with a digital code for 1-2-Switch, what is a perfect tech demo?

Even worse, if you want to buy an additional set of Joy-Con controllers, add another $80 for the set ($50 if bought individually.) Want the Pro controller? That’s another $70, which is above the standard Xbox One and PS4 controllers. Yes I know there are going to be those who will go off about the Xbox One Elite controller, but that’s a premium option that is not required, same for those who purchase and customize a Scuf controller.

And then there is the storage situation. Nintendo should have included more than 32GB of storage to begin with. 64 or even 128 should have been the standard. The good news is the Switch will support SD cards of up to 2 TB, but that too will add to the cost of the overall package.

But one more thing about the price is really a concern, and that is…

Yes, Nintendo said it’s going to start their new online service as free, but later in the year it will be charged. However we don’t know much about what it will provide, and whether the perks are worth it. However what I did hear turned me away right away. At first, voice chat would need to be done by way of a cell phone voice app. Their claim is that no one should be tethered to a headset, but that’s a joke. I use a wireless headset on BOTH my Xbox One and PC. Wouldn’t being tethered to a cell phone be worse? But if that doesn’t turn you away from the online service, this definitely will…

If there is one benefit I will mention about paid services like Xbox Live and PlayStation Network, it is the free games that are given out each month. Xbox Live gives two Xbox One games and two Xbox 360 games a month, all of which can be played on Xbox One. They are yours to keep even if you leave Xbox Live Gold. PlayStation Network does the same thing, giving free PS3 and PS4 games. However you lose them when PlayStation Plus runs out. But thankfully when Plus is renewed, the games are unlocked. It would make sense for Nintendo to do something like that right? Wrong. They are giving ONE free NES or SNES game, but it’s only for ONE MONTH. And once that month is over, you have to buy the game! What is Nintendo thinking?

Nintendo claims they have 80 third party developers supporting the Switch, but we had this happen with the Wii U. Remember how EA said they’d show support for the Wii U? They only released four games and backed out. What if they do the same thing with the Switch? And we saw Bethesda give their support, by announcing a port of Skyrim. The question is if they are releasing the original vanilla Skyrim, or the Legendary Edition? And if they are porting the latter, will the game support mods? Considering the small initial storage, mods might end up going the PS4 route by using only in-game assets. Hopefully there will be an option for those with external storage, but we’ll have to see.

And lastly, THE BATTERY LIFE!

For a game system that is described as a console and handheld hybrid, battery life is very important. However, when your system is announced to have a minimum of 2.5 hours, you know you have a problem. Especially when you consider that your portable New 3DS XL has a minimum of 3.5 hours, you really need to look into ways to expand your battery life, such as an external battery pack.
But I’m not going to be all doom and gloom about the Switch, because there are some things that interest me. And I’m going to start by what I considered the most shocking moment of the conference:

ZELDA: BREATH OF THE WILD AT LAUNCH!

I knew the latest Zelda game was coming out. We knew the Wii U version was planned, and it’s still coming out, but I kept thinking it was going to be out this holiday. So when I saw it listed as “March 3, 2017,” I was in total shock. Never did I think it would be a launch title, and here we are. Zelda is a launch game, and I have a feeling it’s going to end up with a near 1:1 adapt rate. Let’s hope it doesn’t end up like the N64 after Mario 64, with a long drought between games. And speaking of Mario:

When I saw Mario in what looked like New York City (basically returning home) I had initial flashbacks of Sonic Adventure 2, but the more I saw of the game, the more I wanted it. Granted it’s a holiday release but it still be worth the price of admission, especially if it’s as amazing as Mario Galaxy 1 and 2 were. Maybe by then I might get the Switch, but there is only one game that I truly want and after that happens it will be an impulse buy…a new F-Zero game!

Before I knew what 1-2-Switch was I first thought they were doing a real life version of Wild Gunman. It then hit me. Can you imagine Wild Gunman duel style events taking place? There could be tournaments at MAGFest to see who is the fastest draw, and it looks like it would be a blast. I’d gladly take part in it.

But for the time being, I’m going to hold off on buying the Switch. I’m also concerned that it might be like the NES Classic Mini and be a huge target for resellers. I really hope not, but once Mario Odyssey comes out, then I might consider a purchase, but I’m going to wait and see how it all turns out.

2 thoughts on “On The Fence About Nintendo Switch”