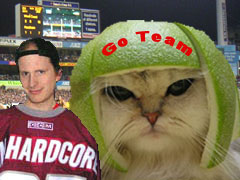 As I am writing this, it is currently thirty minutes prior to the kickoff of the 2005 NFL season. I have been waiting a long time for this night to come, but in the meantime I have been involved with a lot of football related material.

Earlier this week, I was a witness to one of the greatest empire falls in college football. What am I talking about, you may ask? I am, of course, referring to Miami's 10-7 loss to my beloved Seminoles. Now before all you Hurricane fanboys start crying about both quarterbacks playing terribly, keep in mind your team gave up a team record NINE SACKS! Add to the fact that you guys had a punt blocked, as well as a taste of your own medicine in "Wide Left," then you must admit your team has problems.

Need I also remind you about the fact that Miami botched the snap on a potential game tying field goal? As far as I'm concerned, I'd rather be known for "Wide Right" than "Botched Snap."

The victory was a huge monkey off my back. After suffering for five years of "Wide Left," "Wide Right," interceptions by Chris Pix (aka Chris Rix), and of course, ESPN and ABC performing their annual Miami love in, it was about time they got a taste of their own medicine.

Since that night, I have been getting ready for the NFL season as well. I even started a new annual tradition, joining a fantasy football team. Without any prior experience of joining a fantasy team, I involved myself in the EA Fantasy League, and for my draft, I was lucky enough to get Donovan McNabb as my starting QB (with Ben Roethlisberger and Kurt Warner as backups), Edgerrin James and Clinton Portis as my running backs (yes, I know they're from Miami. Sue me!), Javon Walker (a ‘Nole), Lee Evans and Derrick Mason as my wide receivers, L. J. Smith as my tight end, Jeff Reed as my kicker, and the New York Jets for my team defense.

While I might be a little suspect about my tight ends and defense, I feel confident that my QBs and RBs will take me far, as long as the Madden Curse doesn't affect McNabb.

Speaking of Madden, I was happy to see that this year that all the criticism of EA had failed to blossom into reality. After acquiring exclusive rights to the National Football League (as well as the NCAA and the Arena Football League), critics complained that upcoming releases of Madden would be sentenced to the bowels of mediocrity. The theory is that when there is only one game in town, that the owner can play it pretty much how they like and everyone has play by their rules. No competition generally means no real incentive for innovation.

But, over the years Madden has been responsible for some impressive additions every year: Owner Mode, Playmaker control, Hit Stick, you name it. The same can be said about this year's QB Vision and Precision feature.

Naysayers will complain that it is hard to use and that it results in too many sacks. While I will admit that I do get sacked a lot, it is in no way due mainly to this new feature. Matter of fact, I was sacked this much in ESPN NFL 2K5 (not including how many passes were actually intercepted, hence my low 2 1/2 Gem rating, and tons of hate mail as a result).

I am very happy with the final product that EA Sports came out with, and I am curious beyond all belief to see what Madden 06 will look like for the Xbox 360 (I already have my copy reserved as well as the 360 full system).

However, as far as the ESPN 2K5 crowd goes, I'm pleased to say that their play by play and color commentary guys have new jobs. They are now narrating the tutorial videos for both NHL 2K6 and NBA 2K6. So far I haven't heard Peter say "You can't coach that," but that might change eventually.

It is now 9 pm and time for the kickoff!

Fortunately for me there are no Raiders on my team, and the only Patriot I have is David Givens, who is listed as questionable and on my bench. Here is to the start of the "Road to Forty."