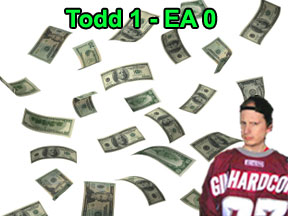 I know by looking at the title of this column you are all thinking the same thing. ‘Oh great, here he goes again attacking Electronic Arts. Let me guess, it’s going to be more about their false PS3 exclusives or their Project Ten Dollar?’ Well, no it isn’t. Yes I know I love to attack EA because let’s face it, it’s fun. It is the equivalent of rebelling against the evil empire who wants to conquer the galaxy, and this galaxy is the game industry and the gamers in general.

I am going off on EA this time because for once, victory comes to the gamers. A class action lawsuit was filed in 2008 which claimed that EA violated antitrust laws as a result of the exclusivity agreements with the National Football League, the National Collegiate Athletic Association, and the Arena Football League. Earlier this week, a settlement in the amount of $27 million was reached.

One of the key stipulations as part of the settlement is that EA is banned from making any exclusive license agreements with both the NCAA and AFL for a period of five years. Could this mean the return of 2K Sports football with an NCAA game in 2013? Will it have original play by play staff? I can only hope so, as long as they can fix the receiver ‘catch, step, drop’ problem I had with NFL 2K5. Sad to say though, the NFL exclusivity deal will remain intact.

But that’s not what makes me happy with this settlement. It’s the fact that customers such as me who bought ANY of these football games dating from 2005 to now will receive compensation. Previous generation games (running on Xbox, PS2, and GameCube) will value at $6.79 per game, and the current generation (360, PS3, and Wii) will value $1.79.

Now since I’ve been playing all of these games every year (Madden and NCAA at least, I never got into AFL,) I guess it’s time we should calculate how much EA owes me:

It might not be much, but I will take it. Anytime I can get some extra money from anyone, especially from a company that’s been nickeling and diming me as much as Electronic arts did, I will take advantage of it. Still, should a check for $38.74 be mailed to my house, it will not make forgive EA for all they have done.

After all, this is Consumerist’s ‘Worst Company in America’ we are talking about. I have my own demands for EA to resolve, though I know it will never happen. Say them along with me now.

3. Advertise games as being on BOTH Xbox 360 AND PlayStation 3, not just the latter as an exclusive.

4. Tell the truth to your customers on your support pages, no ‘we cannot disclose why’ bull.