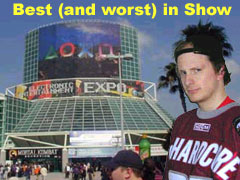 One week has passed since E3, and after spending a lot of time going over all that was presented, all the press kits that I had received, all three show dailies, my copious notes and hundreds of websites, it can easily be determined that this E3 was definitely the year of the handheld.

Usually when it comes to a system launch at E3, it is a console. Not this time!
Several key handhelds were on display. Sony debuted their impressive looking (from a distance, which I will get to later) PSP while Nintendo responded with their Game and Watch look-alike DS. Nokia attempted to make up for their mistakes with the redesigned N-Gage QD, while Tapwave added to their impressive looking Zodiac with new titles. Also, newcomer Gizmondo made their debut with an impressive Window-based handheld gaming system.

I should correct myself about consoles though, as Infinium Labs decided to get off their rears (maybe we can thank HardOCP's criticisms for that) and debuted their Phantom Gaming Service. While the console's showing is a good case of "it's about time," the execution concerns me. Offering the system for free, pending you commit to a service contract of $24.95/month, might be an interesting idea, but I don't like the idea of having to pay for a service. Not only that, but I don't favor the idea of having to download games on demand. As a seasoned veteran of Final Fantasy XI, I know how long it can take for games and updates to download, even on a cable modem (my last FFXI update took over an hour to download).

While my opinion of the Phantom might have been negative, that wasn't my biggest disappointment of the whole show. That dubious title would go to Sega for hyping us for weeks about a killer announcement, only to let us down by announcing they will co-publish The Matrix Online. Big deal! At least on a brighter note they did announce the upcoming Phantasy Star Universe.

The other complaint I have about this year's E3 is how companies are so cowardly about showing off their projects. Case in point: Bungie. Why is it they have to keep Halo 2 hidden behind closed doors? Are they trying to hide the fact that they will keep delaying the game way past its scheduled November launch date?

They weren't the only culprit, so was Activision with DOOM3 (except for NON playable footage of the Xbox version), Nintendo with their DS theater, and of course, the title that may never be seen, Half Life 2. It gets worse when booths such as THQ decide to have a rent-a-cop guarding the door and the only saying they know are "Appointment Only."

But as far as the titles that I was able to see, these were the ones that impressed me the most:

5. DOOM 3 (Activision, only from the video footage I saw)

This year's E3 was a challenge for me to cover. Combining the fact that I had to cover three halls almost by myself, tons of good games were blocked by closed doors or "appointment only" rent-a-cops, and the immature G4 crew members constantly interrupted my interviews, it's a wonder I survived. I only hope that for next year's E3 the Gods of GiN will be able to get me a little more assistance. I need more than three other editors at the show. Doing so much by myself is complete murder!