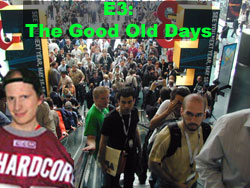 Yes we know that. It hasn't been the same since I've last been there, and that was in 2006. It was then that the ESA decided to seriously scale down the one time spectacle of gaming's latest and greatest. No longer would I be overwhelmed by it all. No longer would I be treated like royalty (as game companies always try to treat the press) and worst of all for me personally, no free Sprint cell phones or full size arcade machines to win.

Last year I made comments saying how I would not have enjoyed going to E3 anymore because of its new location (the Barker Hanger in Santa Monica as well as several neighboring hotel spaces.) But with returning to the Los Angeles Convention Center I would have been more than happy to attend. But sadly that wasn't the case.

It really came to a head a few weeks ago when I went to see my friend and fellow GamerGeeks co-host Kelly, and we were talking about if one of us would ever get to go to E3. After all it was via my coverage of E3 2006 on a web forum that got the two of us talking about gaming and her involvement with both GiN and GamerGeeks. I knew that I would not be able to go this year and then the big question hit. "But what about next year?"

I'm still waiting to hear about that, but as for this year I should be there. I would have loved to be at the Nintendo press conference, which many fellow gamers are calling a bust. And from what I have read on the message boards I couldn't agree more. I would have asked Reggie the hard hitting questions that he seems to run away from. Things like "When are the Wii shortages going to end?" Or how about "When are you going to admit the shortages are engineered because you are afraid to admit that Wii third party games are inferior to the 360 and PS3?" How about "When will you admit there is a storage problem now that WiiWare is out?" Then I could follow-up with "When are you going to stop hoarding Wii Fit and release them en masse?" And also, "Why aren't you showing Kid Icarus?" Then when he is on the ropes I could finish out with "And if you are plugging Wii Music, Wii Sports Resort, the Wii Speak Microphone and the Wii Motion Plus attachment, how many of those will be available? Or are you just going to create a limited number of them to generate artificial hype?" Give us the truth Reggie!

Come to think of it, it might have been good for the big N that I was not in town.

I could have also asked the harsh questions to Sony during their press conference. While it was nowhere near the level of embarrassment they displayed at E3 2006, (no giant enemy crabs or attacking weak points for massive damage,) Jack Tretton never ceases to amuse me with his comments. I'm still waiting for that $1,200 you owe me!

To start off, I'm glad to see that Sony is bringing back the 80 GB PS3 at a new low price of $400, but wait a minute, what's this? No backward compatibility at all? Now I see why you lowered the price. While the lower price would prevent me from feeling like I got ripped off at first, I'd rather have limited, software based backward compatibility than none at all. I would also ask him about the new video store, and while I'd commend them on allowing movie purchases, I would criticize them on making HD movies rental only.

Is it being done so they can still protect their investment in Blu-ray? And while I'm at it, what is the deal with Flower? Anyone got an explanation of it? Reminds me of the premiere of Afrika.

Of course I'd have a few questions for Microsoft too. Would hardcore 360 players be able to conform with the new Xbox Experience coming this fall or would they want to keep the Dashboard the way they like it? What exactly did they do to add Final Fantasy XIII to their lineup? (Granted I have a deep hatred of the series but this was a major coup.) And as for Lips, if you claim that I can import songs from a Zune or iPod, then will you guys finally make a patch that will be compatible with my iPod touch? Please?

And finally, I see that at least some of the great E3 parties have returned. I would have loved to get a personal invite to the Rock Band 2 party featuring The Who. Heck just to be there to play Rock Band 2 would be worth the ticket. Then again, isn't it ironic they had The Who performing when you consider their downloadable content was released on Rock Band this week? A coincidence or great marketing? You decide.

Hopefully next year E3 will be a little bigger, and in doing so will allow myself (and even better, my GamerGeeks co host) to attend and cover everything. It will be so much easier to see everything first hand rather than looking on blogs or suffering through the horrors of watching it on G4 (shudder.) We'll have to see.

But its nice to see the show creeping towards being relevant once again, though we offer no predictions just yet on whether or not the show will continue to live on. But its making some steps back in the right direction.