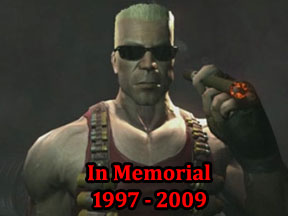 (And it looks like it never will either. Anyone surprised?)

Can someone please explain to me how it would take twelve years for a game to finish development? This game that has been in development for so long that it has become synonymous with the term "vaporware." And more importantly, this game that coined the official release date of "when it's done."

Who could forget when we first heard the announcement in 1997 that Duke Nukem Forever was in development and would then run on the Quake II engine? Wow, have times changed. Whether it was switching over to the Unreal Engine (and its successors) or switch of talent, or whatever excuse we would hear, it seems each announcement about DNF would end up with one word"delay.

And even in 2006, George Broussard claimed that they had many pieces in place and the rest of the series was "simply maintenance and polish from here on out." But still that's three years ago, and what did we get since then? Another small trailer in 2007 followed by a few screenshots, a few more screenshots hiding in the XBLA release of Duke Nukem 3D, and finally some in-game footage from the Jace Hall Show that showed some promise. And after all this, we have to ask Broussard again, when is the freaking release date?

BS I say. No game's development has ever lasted this long! Yes, we know games end up in development hell. We've seen it happen with Daikatana and the infamous "John Romero's about to make you his bitch" ad. Where is he these days? We all know how successful that game was (sarcasm) after four years of development hell.

And on the other hand we have another 3D Realms title, the Human Head published Prey on the PC and Xbox 360. Despite being on hold for eleven years, the game came out rather well. But DNF has now officially broken the record by taking twelve years to complete.

Oh wait, did I say "complete?" Maybe I should take that word back. It's NOT complete, it will NEVER be completed, and it ended up bringing an entire developer down.

That's right, yesterday citing lack of funding, 3D Realms officially closed their doors, and confirmed via Geoff Keighley's Twitter account, development on DNF has officially ceased. That's right, twelve years of hype, broken promises and repetition of "when it's done" leading all the way up to this. And who can we thank for all of this? George Broussard for dragging his feet in the mud and worrying more about the weather knocking over his DIRECT TV dish, dealing with hookers and cocaine, and playing World of Warcraft, than the status of his twelve year magnum opus. Maybe if he were more up front about the progress of DNF then we might care more, and wouldn't place it under intense scrutiny.

In addition, Wired would not end up giving it their top Vaporware Award for many years, even going as far as giving it a Lifetime Achievement Award. Usually I save my awards for the end of the year, but considering all that has happened, I decided to make a change and give George Broussard the first ever induction in the "Dumbass Hall of Shame."

To beat individuals such as Kaz Hirai, Reginald Fils-Aime, and Jack Thompson, that takes a lot of effort. Good work George, or should I say, Bad Work George!

I guess in the end we can change "When it's done" to "when hell freezes over!"

Waiting for: OBVIOUSLY not DNF, but I am looking forward to UFC 2009 Undisputed and Bionic Commando (both on 360)