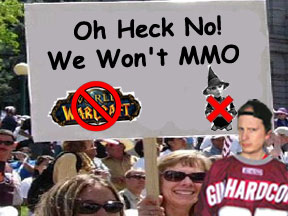 I think all of you are aware of it by now: I hate MMOs!

I do not understand why people would end up paying $12.95 a month just to sit in front of a screen and hunt the same low level creatures over and over again to get a very minimal boost of experience. It gets worse when I actually buy myself a new item and the stats increase turns out to be almost nonexistent.

I've suffered through this with Everquest I and II, Final Fantasy XI, Star Wars Galaxies, and tons of other lesser known MMOs, and after all of this I just figured, why bother? It's the same old thing over and over again, and the fact that people pay to do this puzzles me.

And then of course, there was that "top secret" Sega announcement a few years ago at E3 that I received an invite for. Expecting something huge, I was interested in attending. If you all remember I had a conspiracy theory involving a team-up between Madden and NFL 2K, but of course it didn't come true, and made even worse when Mr. Sitting Bull Rent-a-cop wouldn't let me in the briefing.

But of course I didn't miss much because what was the announcement? That's right, another cursed MMO. In this case, it was The Matrix Online being published by Sega. Wow, that turned out to be so successful. After all, the game was sold to Sony Online Entertainment, and they are going to be unplugging The Matrix at the end of the month!

Of course the biggest MMO out there is World of Warcraft. Despite temptations from others to try it out, I never did, as I felt the monthly charges could have went elsewhere. There's no denying that the game is popular. When you are being satirized in a complete episode of South Park, you know you are doing something right. But still, I didn't want anything to do with it.

In fact, there was another (Activision) Blizzard title that I had been waiting for: Starcraft II. I had been waiting for it for a long time now, ever since I gave the original Starcraft my personal choice for Game of the Year in 1998. (Of course, we know how that really ended, going to that other title Heart of Darkness that very few people ever played.)

Then we had that spinoff called Starcraft Ghost that ended up being canceled after going through development hell.
Starcraft II should have been available by now, even with Blizzard's tendency for insanely long development cycles.

But as far as Starcraft II is concerned, according to Eurogamer, the long development is a result of a majority of the design staff being sent to work on World of Warcraft for a year. So here we go again, with an MMO holding up a game that I am looking forward to, perhaps one of the few PC (or Mac) games that I really want to play.

I know there are going to be a lot of MMO fanboys out there wanting my head about my opinion of the genre. If you don't like the fact that I'm so dead set against them, then too bad. This is how I feel, and the fact that one MMO's development in particular is holding up a much anticipated game makes it a harder pill to swallow.

So come on Blizzard, give me my Starcraft II by the end of the year! No more delays. No more sending your staff off to work on WoW expansion packs. No more BS! We've waited six years. Do NOT make this another Duke Nukem Forever!