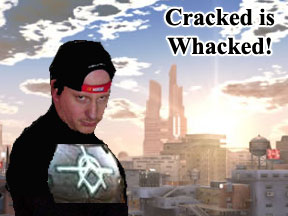 I loved the original Crackdown. It was a fun action shooter that allowed me to explore an entire city similar to the Grand Theft Auto series. However unlike GTA, I had more fun running around through the city rather than driving through it.

Why was that? It was because of my character’s (or Agent’s) special ability to run fast, jump high, and climb buildings to obtain orbs to boost my abilities. Another game that came out later, Prototype, gave me the same feelings, and it too was a lot of fun.

When I wasn’t jumping around all over the city like a super hero, progressing through the game’s story line, which centered on attacking three rival gangs, picking off their hierarchy and eventually stopping their lord, was a lot of fun. I loved how the Peacekeepers kept giving vital information on each crime boss and even presenting me a success probability on my mission. It made me feel like I had others on my side helping me out. And the voiceover of the game known as the "Voice of the Agency," was extremely well done. The way he spoke in a campy overtone, constantly telling you to "thank the Peacekeepers for this," was done in a way that I thought worked well in the game.

Sure, at the time Crackdown got a lot of hype and publicity because it came bundled with a beta code for Halo 3, and I admit I was one who bought the game for that, but in the end, I was more than pleased with the final product. It was a great game.

Crackdown 2, on the other hand, where do I begin?

For starters, where did the great hierarchy go? Here we only have two factions to fight against: the terrorist organization Cell and the mutated Freaks that overrun the city at night. Right off the bat the game feels less like Crackdown and more like Dead Rising with a touch of I Am Legend with the mobs of Freaks running the streets. Hell, I even got into an Agency Supercar and was able to plow my way through hordes of them as if I was in the Willamette Mall’s parking garage. While it was fun, it is NOT what I expect from a Crackdown game.

The exploration part is also fun, when I am allowed to. I say this because most of the time when I explore, all of a sudden I am attacked relentlessly by Cell armies, and God help anyone once they start using rockets and grenade launchers, because you can’t even move without being pounded into submission. It’s frustrating.

Same issues occur when surrounded by a mob of Freaks. Good luck even trying to move and run away, as your Agent feels like he needs a walker, and these are supposed to be enhanced agents? You have got to be kidding me! It almost got to the point that I would have added Crackdown 2 to the list of games that destroyed a controller, the last of course being Dante’s Inferno.

But what really got me the most on why I disliked this game? THE LACK OF VARIETY!!!! Sure Crackdown 1 didn’t have much variety, but this is much worse. The two key objectives in the game are to reclaim tactical locations from Cell and activate light beacons as part of "Project Sunburst" to eradicate the Freaks. That’s it. Just those two missions! Yes, I know there are both agility and driving races, as well as stunt jumps, but either way, this is still very shallow.

And what turned out to be the final straw of the game, the last tactical location I needed to obtain, at a near impossible to find location. It’s not the location itself that is impossible to find, as it’s on the ground like the others. It’s where all the Cell resistance is located that makes it impossible. They are in a very high location that I cannot reach by jumping, made even worse with the once awesome, but now irritating "Voice of the Agency" repeatedly saying "Get back to the Tactical Location now!" AND I AM ONLY A FEW METERS FROM IT! What part of short distance does that Agency not understand? After hearing that over and over again, with no knowledge of my current location from the game, I yelled out "#%!@ this!" and turned the 360 off and packed the game up in a Gamefly envelope before I might have been tempted to destroy it out of anger.

I’d love to know what Ruffian Games was thinking when they did Crackdown 2. Why take out the stuff that made the first game more fun and turn out a shallower product? Why must they make Cell a bunch of rocket happy maniacs? And why, dear God why, did they have to take ideas from Dead Rising? This is NOT the Crackdown I knew and loved, and if it weren’t for Gamefly, I might have purchased the game at launch and eventually ask Microsoft for my money back.

I know this is a column but it feels more like a review and if it was I would easily give this game 2 Gems, so consider yourself lucky Ruffian! However, that doesn’t prevent you from being a potential candidate for Worst Game of the Year (but it’s still up to Alan Wake’s boring pace to decide whether you’ll take over that spot or not.) Consider yourself warned!

Waiting For: Metroid: Other M (Wii)