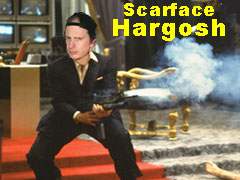 As anyone who has read my commentaries in the past, or my reviews, would know that GTA: Vice City is one of my personal favorites. I've always been a fan of gangster games and movies (ironically, as I am writing this, I am watching Goodfellas on DVD), and it is a well known fact that the GTA series borrowed heavily from gangster movies. GTA 3 had similarities to Goodfellas, Godfather, and even some touches of the ultra violent masterpiece Scarface (especially one of the radio stations, which featured songs from the movie).

Scarface borrowed more from the movie. As if being in a fictional take of Miami isn't enough, how about a plot to kill a reigning drug lord (Vice City's Ricardo Diaz as opposed to Scarface's Frank Lopez), overtaking and running his business, and finally ending up with an all out shootout at the lead's mansion. However where Tony Montana met his end by way of a double-barrel shotgun to the back, Tommy Vercetti was able to sneak out of the mansion and off Liberty City mob boss Sonny Ferelli with a sniper rifle slug to the head.

Now anyone who gets blasted with a shotgun in the back and falls two stories into a pool of blood should obviously be dead. But then again, when you're on a high of adrenaline after seeing your sister gunned down, not to mention diving face first into a mountain of coke, (the drug and not the soda) nothing can seem to kill you.

I'm guessing that VU Interactive is thinking that as well, because the latest EGM displayed a world exclusive on a sequel to Scarface which is set to come out late next year, assumedly on PS2 and Xbox.

The news completely took me by surprise, but then again, after GTA's success (especially after Vice City), swarms of copycats are bound to appear. We've seen titles like the Getaway and the surprisingly good Simpsons Hit and Run pop up on the market. The fact that Scarface would be made into a game is almost inevitable.

However the idea for the game is a surprise. Rather than see Tony's rise to power from the 1980 Mariel Boat Lifts to his assassination by Alejandro Sosa's hit squad, the game takes place after that supposed assassination. Tony somehow survives the ordeal but his empire is in ruins, and now all that he can think of is revenge against Sosa.

It will be interesting to see how the final product will turn out, especially since the movie was notorious for its violence, drug use (Tony ends up with some blow on his nose right before the final assault on his mansion), and of course, the overdose of F-bombs. When the movie came out, it had the record for most F-bombs at 208.

As for the violence, will we ever get to recreate the "chainsaw in the bathtub" scene? Or will we get to see someone hanging from a helicopter? Most importantly, we will have the actual actors play the roles? I don't really see Al Pacino doing voice acting, and as for Sosa's character, the original actor (Paul Shenar) died in 1989 from AIDS related complications.

I do hope they will find the right people from the job, just like EA did for the voice of Buffy or what MGM did for Lee Van Cleef in the recent DVD special edition of The Good, The Bad and The Ugly.

EGM reports also that screenwriter David McKenna, who worked previously on American History X and Blow will write the story, and best of all, the game is being developed by Radical Entertainment, the same guys who made The Simpsons Hit and Run.

Sure we will have to wait a full year to see the finished product, but I will be certain to add Scarface to my must see list at E3. If it's as good as The Simpsons was, I will be pleased to see Tony pull out his "little friend" again.