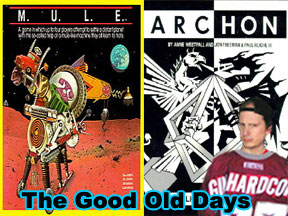 A few days ago, I looked back at an old Atari 8-bit computer game called M.U.L.E. It was a simple strategy game playable by up to four people, which added a unique element of supply and demand economics in order to colonize a remote world. In addition, I played another classic computer game called Archon, which was a cross between chess and a game of Tank. Back then, these games were quite original, and they were the foundation for a new publisher: Electronic Arts.

I played many EA games during the Atari/C64 days, but didn’t really get into them first hand until I got a Sega Genesis, and was hooked with both the Madden and NHL series, and from there it went on to other great games such as Mutant League Football and the Strike series. EA really showed their stuff back then, and when their original founder, Trip Hawkins, announced his next project, the 3DO Interactive Multiplayer, I ended up playing their games on that platform. In fact, it was the EA games that really shined on the 3DO, a system that would eventually get the reputation of being a system best known for infotainment and FMV games. Look at what they did with FIFA Soccer, considered by many as one of the best sports games ever made.

But after the 3DO, it started to go downhill.

And it was all because of one John Riccitello.

I know I go off a lot on this guy, but it seems everything he does is one step closer to ruining the game industry as we know it. Keep the Dreamcast days in mind, and how he refused to publish any of their games for the that platform, stating "the dollar we spend on a Dreamcast game is one less dollar for our marketing or PlayStation 2 strategy." When I heard that comment, I knew that Riccitello only cared about the financial side of the industry, and not the gamers that help nurture it.
Since then, what have we seen?

Remember when Spore came out for the PC? I’m sure anyone who did remembers the suffering of dealing with SecuROM copy protection that limits the game to three installations, eventually turning the game into a $60 rental.

Ok, I know I fall for the trap every year, but since acquiring exclusive NFL rights for Madden, it seems that it is the same game every year, with minimal improvements and a roster update. There isn’t enough to warrant a full purchase, especially compared to 2K. It makes me glad that NBA Elite failed and was cancelled right before launch. (Thank you Hard8Times, for exposing the truth!)

Yes, I’m beating this dead horse again. It seems every commercial that EA does for a new game only shows the game being made available on PlayStation 3, even going as far as saying at the end of the ads "exclusively on PlayStation 3." They did this for Madden, Battlefield 3, Need For Speed: The Run, and for SSX. I just love to know how John Riccitello loves lying through his teeth, especially with the nice bonuses he gets from Sony for doing that.

Then again, he might be reconsidering this action. Both Mass Effect 3 and Tiger Woods 13 have been shown as being played on Xbox 360 with Kinect. There might be hope.

Origin Systems, Westwood Studios, JAMDAT Mobile, PopCap, DICE, Bioware. What do all of these studios have in common? They’ve all been acquired into EA’s eventual monopoly.

And of course, the worst thing in the game industry from the desk of Mr. Riccitello:
PROJECT TEN DOLLAR!

Talk about the best way to forever kill off used game purchases, trade-ins, and even rental services such as Gamefly! You got your game; now all you need to do is pay EA an extra $10 to play online! To think, I rented Mass Effect 3, and I’d have to pay for both online and the Day One DLC? Forget that!

And it appears that I’m not the only one who is fed up with Mr. Riccitello’s actions. Many others are as well. For the longest time, I referred to my colleagues at GiN that EA should henceforth be known as EpAy to show the acts of greed they show upon gamers such as myself who can’t even afford paying full price for games, let alone all the extra DLC they will gladly force feed down our gullets.

But it gets better, the public is furious, and I was proud to see earlier this month that watchdog site The Consumerist recently completed their Worst Company in America tournament to coincide with March Madness. Usually this bracket is won by bigwigs such as Halliburton, AIG, Comcast, and BP, with Bank of America achieving runner up status the last two years. But this year, the gamers have spoken, and EA is the 2012 Worst Company in America!

I even made a request on the GamerGeeks Facebook page to make this a reality, and everyone listened. It’s about time we showed EA what they are doing to gamers, and of course, their response is as flippant as ever.
"We’re sure that British Petroleum, AIG, Philip Morris, and Halliburton are all relieved they weren’t nominated this year. We’re going to continue making award-winning games and services played by more than 300 million people worldwide."

Go figure. When EA started they did an advertisement asking "Can a Computer Make You Cry?" Well, if you replace Trip Hawkins with John Riccitello, the answer is a definite yes.

(Special thanks to www.theconsumerist.com for exposing EA for what they have done, and awarding them the Golden Poo this year.)

Waiting For: Anything Right About Now!