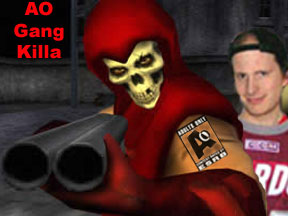 Rockstar Games. What can be said about them? What other game developer can come up with more notoriety than them? After all we are talking about the guys who are responsible for the Grand Theft Auto series, which many consider to be the end all, be all, of the excuses of game violence. Sure Rockstar may have also come out with a few clean titles, such as Table Tennis on the 360, but they will always be known as the "Bad Boys of Gaming."

But nothing could have prepared us a few years ago for a game like Manhunt. Even if can be considered a stealth title, Manhunt was notorious for some over the top violence even by Rockstar's standards. And yes, of course, it got its share of attention just as much as the GTA series did.

But it also sold very well. Well enough to warrant a sequel, right?

That's what we were supposed to hear. Manhunt 2 was listed as in the works for the PlayStation 2, PSP, and much to everyone's surprise, the Wii! It was the Wii version in particular that got all the attention. Not only would it be a strong change to Nintendo's family friendly image, but the idea of using the Wiimote and Nunchuk controllers to perform some of the grisly kill maneuvers might be a bit too much for some gamers. And yes, I'm sure that sent a certain Florida attorney on a rampage.

Manhunt 2 was originally slated to come out early next month, but in the past week the game was the center of many a controversy. It has since been banned by the ratings boards of both the United Kingdom and in Ireland, and here in the States, it has suffered the worst fate a game can receive: getting an AO (Adults Only) rating from the ESRB!

Just like how the NC-17 rating is a kiss of death for movies because they will never be shown in public theaters, games that receive the AO rating will not be sold in major retailers. Only one other game was rated AO, and what was it again? That's right, Grand Theft Auto: San Andreas by our friends at Rockstar. And that was because of the infamous "Hot Coffee" hidden minigame. (Rockstar has since released an edited version of GTA: SA without Hot Coffee and retained its original M rating.)

Already, both Nintendo and Sony have made it clear that they will not allow Manhunt 2 on their respective systems, as long as it carries the AO rating. And in a strange twist of fate, online rental distributor GameFly will refuse to carry it. (Strange because of the fact that you have to be 18 to register with GameFly to begin with.)

Rockstar has since announced that they have put Manhunt 2 on hold until they make a decision whether to or to edit it based on current circumstances. As it is, they are going to lose millions in sales according to analysts.

It will be interesting to see how Rockstar handles this situation.

And then of course should they cancel, they still have GTA IV and another potential controversy around the corner"