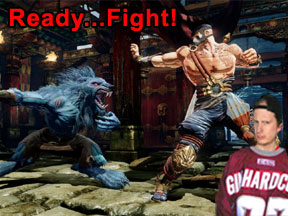 Getting Back to Fighting Games

I guess if there was one thing I was interested in as far as the Xbox One’s launch is concerned, it was the return of the Killer Instinct franchise. The announcement at E3 caught my eye and piqued my interest, but was immediately downscaled when I heard that it wasn’t Rare who was developing KI, but rather Double Helix Games, a developer whose history does not sound promising with past releases including GI Joe: The Rise of Cobra, Green Lantern: Rise of the Manhunters, and Battleship. I really hope that KI, as well as the upcoming Strider remake, will make up for their past history. I can also add to my hopes that Ken Lobb, who was involved with Rare during the N64 and arcade releases of KI will provide his support in development. That might make the game very close to the original.

The other concern I had with Killer Instinct is how it would be released. Initially, KI is going to be a free game with only one playable character, Jago. Additional characters can be purchased individually, as well as a season pass. I do hope though that Microsoft does offer the game as a full release too, with some bonus characters available as DLC, similar to what Netherrealm Studios did with Mortal Kombat 9. The reason is because I don’t want to see that I’m only going to play against the characters I purchased. Sure I understand I can’t play as characters I didn’t purchase, but I don’t want the AI to be stuck with only Jago as well.

Despite these concerns, I did watch some work in progress that looked promising. Many people claim that it looks more like it’s just a Street Fighter clone, but I will be the judge of that in the end. It does feature the names of all the combos that were awesome in the past games (though even considering a two hit as a "Basic") but also include new names for combos such as "Quad" or "Beastly."

And of course, there are the Ultras, finishing moves that consist of a stream of up to 20 hits, and when linked with previous moves, combos of over 80 hits are possible.

However, during SGC, I noticed something new: the ability to cancel an Ultra mid-move, chain more attacks, and then perform a second Ultra.. Even cooler was the way the background music performed dynamically with the Ultra’s moves. It’s something simple but in the end is quite cool, as was the original yell of "ULLLTTTTRAAAA!" that eventually became my notifications ringtone on my phone.

Sadly, another build was shown at EVO 2013, one that included a third character, Glacius, that altered the Ultra yell to just yell out "ULLTRRAAA COMBOOO." While that would be more true to the original games, it sounded very drab and uninspired. I really hope that Rare and Double Helix take this into consideration, and bring back the original yell. But still, while I’m not getting the Xbox One in the immediate future, I know there will be some who are getting one just for KI, and I’ll head over to their houses and play it.

But the last few months, it wasn’t just KI that got me back into fighting games, as I have been making a return to older games such as Mortal Kombat 9 and Super Street Fighter IV, and finally after waiting months and months for our copy of Injustice to arrive, I gave in and purchased a 360 copy. The only problem is I also have to get all the DLC in one lump sum as well as the game itself. That means Lobo, Batgirl, Scorpion, General Zod, Martian Manhunter, and the recently announced Zatanna will have to be purchased Needless to say it will be putting a heavy dent in my bank account that I will need to manage. Maybe I’ll just get General Zod first and then play it by ear on who to purchase next.

And also I will need to update my copy of Super Street Fighter IV. I already have the Arcade Edition 2012 update installed, but the latest version, Ultra Street Fighter IV was announced at EVO, which will include five new characters: Elena, Hugo, Rolento, Poison, and one additional character never seen in a Street Fighter game. Despite what the general public says, the new characters are said not to be ripped directly from Street Fighter X Tekken, and I really hope that’s true, because that game seriously disappointed me and I want redemption.

So yeah, it looks like I’ll be getting back into the fighting game market again, a genre I have been out of for the past few years. Who knows, maybe I’ll end up attending EVO in the near future. I can dream, can’t I?

Waiting For: The Bureau-XCOM Declassified (360 Yes I’m going to give it a chance), Ducktales Remastered (360)