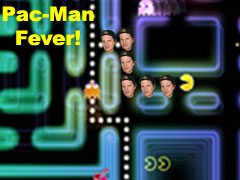 Anyone remember the big announcement that Sega did a few years ago which was supposed to set the gaming world on fire a few years ago? I'm sure you don't, but it was the fact that Sega would co-publish the Matrix Online. I even got an invite to the press conference, but go figure that Sega denied me access because they knew I would not give them a positive reaction (remember Shenmue II and it's "promised" Dreamcast release?)

After all, what came out of the Matrix Online? Not much that I can remember except for the fact that Sega sold their rights over to Sony Online Entertainment, and therefore fell into the void of other countless MMOs that we don't know or even care about.

Well again it seemed like there was going to be another one of those "huge" announcements earlier this week. Thankfully though it wasn't all doom and gloom like the typical MMO overkill. On Tuesday, via the blog site www.xbox360fanboy.com, Microsoft said they would come up with a huge announcement that would "go down in video game history." Of course, speculation started to rise of what it would be.

A new Xbox 360 Elite with built in HD-DVD drive to fully combat the PlayStation 3?
Microsoft and Nintendo to merge and finalize the Wii60 deal? Space Giraffe will finally be released on Xbox Live Arcade?

While the last one might seem the most possible, it turns out everyone was completely wrong. The big announcement was that a new version of Pac-Man, in this case, Pac-Man Championship Edition, which is the same edition used in the finals of the Xbox 360 Pac-Man World Championships, would be available for download via the Xbox Live Marketplace for 800 Microsoft Points.

Disappointment stormed the comments sections, where rabid 360 fanboys were already proclaiming to boycott the title, not even to download the trial version.

I too was one of those individuals. After all it seemed that every Wednesday, Microsoft was just releasing a rehash of a classic game with an HD graphics overall. Some didn't even bother to include a makeover (Xevious, anyone?) I was getting tired of it, because there are is a lot more out there than just old remakes.

And yes, retro fanboys, I don't want to get any comments from you claiming that my demand of Space Giraffe's release is hypocritical, writing it off as another "Tempest 2000 wannabe" because for the last time, it is not!

But getting back to what I was saying, despite my disgust of what I thought would be another HD classic, I still have an open mind, and decided to give the trial a shot. All I can say after playing Champion Edition is that this is what a classic remake should be.

Like Tempest 2000 on the Jaguar, it takes the original concept and enhances it to the point of near insanity. Sure Ms. Pac-Man did add new mazes, but Champion Edition actually features a single maze that is constantly evolving every time a fruit is eaten, an insane sense of speed, and a strict time limit.

I haven't enjoyed a Pac-Man title like this in such a long time, and keep in mind I actually sold my Pac-Man 25th Anniversary cabinet to buy a laptop.

In the end, I ended up buying C.E. for the 800 Points. Actually it only cost me 500 because I had an additional 300-plus points left over from previous transactions, all well worth it.