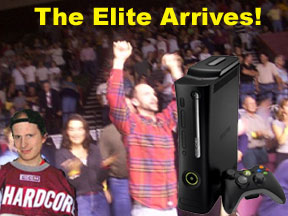 When I purchased my new LCD HDTV earlier this month, there was something on it that I did not have on my previous monitor, an HDMI port. But when I got it at first, I couldn't really care much about my Xbox 360 not having HDMI capabilities. I was using a VGA cable, and the video quality was absolutely stunning, especially at the highest possible resolution (1366×768.) Even with running the HD-DVD drive, the video quality was amazing when running under VGA, which seemed to remedy the lack of HDMI.

And of course, with the VGA cable I didn't have to worry about digital audio going into my TV, as I use an external receiver and an optical cable. What would have happened if I had to use a dedicated HDMI cable and run it directly into my television speakers?

It looks like I'm going to have to think about it even more now. Just this week Microsoft's worst kept secret was finally announced, in the form of the Xbox 360 Elite.
The Elite features a slick black finish and will come with built in HDMI capabilities built into the console, including the ability to upscale DVD movies to a higher resolution than the 480p that the current 360 Core and 360 Premium are capable of.

But there is something else on the Elite that will interest me even more: that Microsoft is finally offering an option for a larger hard drive. As it stands now, my 20 GB hard drive is starting to run low on space. With all the XBLA games I have, the trailers, TV shows, and other miscellaneous items on my hard drive, it will be time for me to start transferring all my files to my computer. But now that the Elite is coming out with a new 120 GB hard drive, there will be plenty of room for my stuff now.

There is a concern about transferring content from those who own a 360 Premium to their new Elite, because downloadable content is only licensed to the 360 it was downloaded for. Hopefully Microsoft will come up with a solution for those who do upgrade to Elite status.

But still, that's for those who want the Elite. Thankfully, there will be a separate 120 GB hard drive for Core and Premium 360 owners. The only catch is the huge price tag of $179! I also wonder how many separate hard drives will be available when they come out. Are we going to have another shortage like we had with all the recent console launches?

The same can apply for the Elite. With a retail price of $479, it will be quite a lot for anyone who just wants to upgrade their 360 just to get HDMI. Hopefully for those current system owners, Microsoft will allow an option to purchase a separate HDMI cable, probably in time for the "new E3," but for anyone who has waited to purchase a 360, this might be the best choice for them.

Sure not having an HD-DVD drive built into the Elite is a little bit of a curiosity, but that's always an option. Most likely it would have raised the price of the 360 Elite to PlayStation 3 levels.