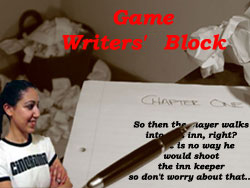 Comic book writers and Hollywood screenwriters are being hailed as the saviours of the industry. If a game's got a proper writer on board – you know one of those guys from the latest convoluted TV plot-line being stretched into a seven season show, when really it only had enough interesting material for two – then you know it's going to have a great story and dialogue. Or is it?

The games industry seems to be intent on borrowing talent from other fields, rather than developing its own experts. Yeah, yeah, there are crossover elements. Films have pictures, so do games and comics are like storyboards for movies, ergo film and TV writers will be able to write for games.

Really we should be happy that games developers are beginning to think enough about narrative to actually employ writers at all. I mean, up until now, the tea boy could have been roped in to write the script. Afterthought doesn't cover it. Okay, so now we're getting real life writers in to do the words bit, but are they well-equipped to write for games? I think there's a danger of overlooking the differences between film, books and games, in the rush to fill the creative void.

Just this week, Codemasters announced that Rhianna Pratchett will be the script writer and ‘narrative designer' (la-di-da) for the new Overlord game. Rhianna (yes, she is daughter of Terry Pratchett) is the most rare of creatures, in the fact that she specialises in writing for games. That's right, she doesn't just do a spot of games dialogue when she's a bit short of cash, she actually works in the games industry as a writer.

Lennart Sas, director at Triumph Studios recognises the importance of writers who know games. He says, "Rhianna understands that writing for games is different than writing for movies, which puts her above some of the Hollywood writing talent that have lent their names to games previously."

Although the ability to craft an enthralling narrative and develop believable characters are transferable skills, there's a bit more to writing for games. The trouble with writing for this medium is people like you and me. If it weren't for us players, the whole thing would be so much easier. The trouble with videogames is they are an interactive medium and that's what sets it apart from writing for TV, film or comics.

Videogame writers need to think about the player and the fact that they need to interact with the world. This means screenwriters won't automatically become the best games writers. Delivering a well-crafted, 100-page script and expecting it to be faithfully developed into a game, just isn't going to cut it.

When you write a movie script, the actors deliver the lines, the movie is played, the audience watches it and oohs and aahs in all the right places. However, a game is a different matter because these pesky players come and make your lead character do something unexpected like try to shoot the inn keeper. That wasn't supposed to happen and now the responses of witnesses need to be scripted: do the police get involved and how does the inn keeper react? Basically, writing a game is like trying to script the king of improv.

Writing for games means remembering that the player could and probably will do anything. Every time the player is given a choice the story needs to follow every branch of every decision. NPCs need to react in different ways and events need to take the right twists and turns, making a game script an epic undertaking that most screenwriters may not appreciate.

The role of the writer has come a long way in the games industry and figures like Rhianna Pratchett prove just that. However, Rhianna is the exception, rather than the rule. Contracting a screenwriter to fix the story at the end of the whole process isn't the way to go. The writer needs to get on board at the beginning of development and work with the team all the way through. Writing a script shouldn't be about damage limitation, it should be about crafting a story and environment that relishes in the added dimension of interactivity.

It's not just the games industry that seems to make writing an afterthought. Ever been to a corporate website that seems to have been cobbled together by a chimp? That'll be because the MD thought he could do the writing himself. Everyone seems to think they can write. Well, I suppose we can all physically write, but it doesn't mean we're any good at it. Years of experience in doing nothing but writing has got to count for something, so appreciate the craft and get the best writer for the job, rather than the first one that comes to hand.