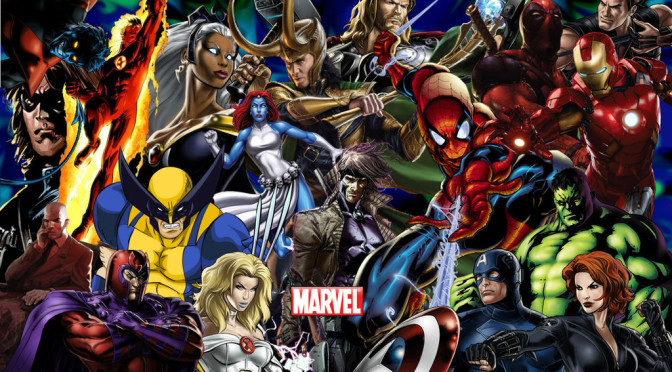 Perhaps my title should be, ‘why can’t comics do games?’ because DC only has the Arkham series to hide its shame. That said, Marvel games don’t even have an Arkham equivalent and although it’s not a dead loss, Marvel’s games division needs to do a lot of work to catch up with the TV and film successes.

With Avengers: The Age of Ultron, the sequel to, arguably, the best Marvel movie to date, mere weeks away, I can’t help thinking there’ll be a cheap game tie-in hot on its heels.  And therein lies the trouble with Marvel and games. It just can’t let go of the 80s movies model, which sees every summer blockbuster gets its own shonky game, to squeeze out a few extra dollars.

Marvel’s film releases have been going from strength to strength. Spider-man and X-men used to be their go to characters, but since the success of Thor and Iron Man, it’s been all about assembling the Avengers.  This brought a whole slew of new characters to the mainstream, but where are the games that match up to the likes of Agents of S.H.I.E.L.D.? And where is the equivalent of Joss Whedon to take the helm of a killer Marvel gaming experience?

I think Marvel could be a victim of its own success. The money being

raked in from all the eponymously titled superhero films and their team-up counterparts has created a new Marvel Universe.  Agents of S.H.I.E.L.D then ties in with the films and everything’s tightly controlled. But tight reins do not a decent game make.

Marvel needs to think beyond the game/movie tie-in dynamic. When DC let Rocksteady Games have some fun with Batman, they created Arkham, which is the best comic to game series going. I’m not a huge Arkham fan, but I can see the appeal and there’s no denying it’s a polished experience that’s dripping with comic lore and atmosphere. That’s all comics fans ask for – a good game, that understands the source material.

One thing comics fans are sick of, is cookie cutter gaming with a superhero slung in the middle of it. Bad graphics, a hackneyed storyline and insultingly incongruous gameplay. Games like that just suggest that Marvel thinks gamers will play anything, as long as it’s got Wolverine in it.

So, let’s take a look at Marvel’s track record. Marvel vs Capcom is probably the first thing that springs to mind. Although it’s a much loved series, I’d say, it could easily be Power Rangers vs Capcom or Glee vs Capcom. There’s a lot more there for fighting game fans, than comics fans, who don’t like fighting games i.e. me.

Spider-man has had a couple of passable outings, back on PlayStation One. The basic premise was Spider-man swinging about through Manhattan, wise-cracking and battling famous foes. Hmm…sounds a bit like the Arkham series. Methinks Marvel needs to take note.

Then there’s LEGO Marvel Superheroes, which is undoubtedly the biggest Marvel success. Thanks to the previous success of things like LEGO Star Wars, Marvel felt secure enough to let the devs loose on their characters. Although, the whole Disney owning Marvel thing, might have something to do with that deal.

Looking ahead, we’ve got Marvel Heroes, the free-to-play MMO, which was due in 2013 and is now expected this year. That two-year delay doesn’t bode well. And if it’s anything like DC Universe Online it’ll be meh at best. Other than that, Marvel has a lot of free-to-play mobile stuff that’s just not worth mentioning.

I’d love to see Marvel take one of its lesser known characters and let a sympathetic developer have a go at creating something fresh. Although even the likes of Doctor Strange and Black Panther have got movies coming, so not many stones have been left unturned. But the games could sit outside the film universe.

I really don’t like Marvel’s obsession with crossovers, which is really just a marketing ploy to get me to buy more comics titles. Similarly, the new Marvel Universe is just restrictive for creators. The current approach for Marvel games, just isn’t working, so it’s time to give some creative freedom and see what happens.

There’s also the whole argument, that now Iron Man has to look and sound like Robert Downey Jr or Thor is Chris Hemsworth, but the comics don’t use their likenesses. Just because games have moving images, doesn’t mean they are extensions of the films. They are a medium in their own right, with their own limiting factors and benefits. Take a chance, Marvel – it might just pay-off.

Are there any Marvel games you love or games you wish Marvel would make? Sling them in the comments and let’s discuss.