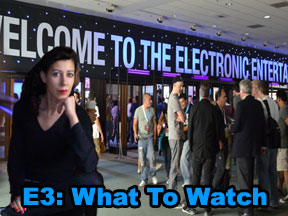 This E3 will change the next five to 10 years of gaming. With the next generation consoles incoming, thinf are really going to change. Usually, one generation to the next just brings better graphics and a few new IPs, but this time it feels a bit different. So much has happened in the consumer technology sector during the last generation with the birth of tablets and smartphones, changing the way people consume media of all kinds. E3 is a chance for the games industry to shine and all eyes will be on Sony and Microsoft. Here are some of the things I’d like to see next week, and what you should probably keep an eye out for.

What I want to see from Microsoft is some games. I have no doubt that they’ll deliver on this front. They took some flak for their decision to focus on TV at their reveal event. Since then they’ve gone on a PR offensive to try and whip up anticipation for E3, promising us games galore.

I’m hoping to see a new Halo game to go along with the TV show. I’m also interested to see the exclusives they hinted at in May, including eight new franchises. Count them.

Microsoft also needs to answer the pre-owned question. We want some straight answers and we want to know how much it’s actually going to cost to play used. Can we lend to friends and can we play games on different user accounts within the same household? The answers to these questions could be make or break for Xbox One and its reception at E3.

It’s interesting to see that Sony’s press conference comes after Microsoft. Sony usually likes to get the jump on its competitors. Could it be that Sony execs are waiting to see Microsoft’s stance on the pre-owned dilemma? Do they have two versions of their presentation? Plan A if Microsoft allows pre-owned and Plan B if they don’t?

For me, Sony is where the innovation is happening right now, so I’m looking forward to seeing more games. I want to see more about Rain, the download only game from Sony Japan’s C.A.M.P. studio.

I’m also hoping for some good news regarding The Last Guardian, the troubled project from the creator of Ico. I’m sure we’ll get more from Beyond: Two Souls and I’m expecting to see a few more exclusives.

Good old Ubisoft always gives us a good show and really knocked us for six with the Watchdogs reveal last year. Once again, they’ve got a goodie bag of games to show: Assassin’s Creed: Black Flag, Watch Dogs, South Park: The Stick of Truth, a new Splinter Cell and Rayman. And those are just the ones we know about. I’m hoping for more new IP from Ubisoft, who seems to be the best at keeping industry secrets, so you never know.

It’s all about the games really, so here’s a list of the titles I’m looking forward to.

We haven’t had much news on this, other than last year’s amazing trailer. I’d like some more information on what looks like an interesting female protagonist and a bit more on the gameplay.

I can’t wait to find out more about this and I’m hoping the gameplay is less about mid-traffic shootouts and more about story, character and strategy.

Wii U owners, as our own Todd pointed out recently, really need some good games. And where better to start, than with the return of Pikmin. Nothing beats a plant-based strategy game.

This one’s for our editor, John Breeden. He loves this series and the trailer is looking gorgeous, so let’s hope we get more on this update of the stealth-em-up franchise.

It’s got pirates. What more do I need to say? I’m just hoping I can land on Grenada – my paternal home. You all know I love the AC series, so this is a space I shall be watching very eagerly.

Beyond Good and Evil 2

Okay, this is where I get optimistic. I want this game to exist. We’ve had a teaser trailer and in 2012 we had some screenshots, as well as news (for news also see rumours) that it is pegged for next gen consoles. I live in hope.

This week’s alleged leaked Sony E3 list included The Last Guardian – spiritual sequel to Ico and Shadow of the Colossus. So who knows.

We know it’s coming, so let’s hope BioWare deliver something really worth celebrating. If we get a trailer, this will make E3 for me and might even persuade me to start saving for a next gen console.

That’s all I ask for. It’s not much, I know. Hopefully, we’ll get some pleasant surprises too. It all kicks off on Monday, so stay tuned to our GiN E3 News Page for the latest from the show floor.