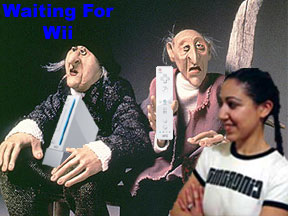 Much like waiting for Godot, the wait for the launch details of Nintendo's Wii seemed to be a fruitless activity. But at long last we have a date, we have a price and we have an approximate launch line-up.

In contrast to Sony's bombshell, Nintendo buoyed the industry and consumers alike with news that the Wii will be released this side of Christmas. The official date for the UK and Europe is December 8th and the price is Â£179,with is about 300 of your Yankee dollars. Yes, I'm afraid the UK and Europe have been stitched up again; paying around Â£50 more than US gamers and Â£20 more than the Aussies. Added to that, we are the last to see the console, with even Australia getting it a day ahead of us.

What is it about Europe? Do we have a sticker on our foreheads saying, "please falsely inflate all prices, we're loaded and happy to pay over the odds for any old crap you care to sell us?"

I guess, at this stage in the game we should be thankful we're getting it at all, if Sony's disregard for such an important territory is anything to go by. But let us dwell on the positive side, rather than griping about the injustice of it all and shaking our fists at the heavens.

According to Ninty, we will be able to enjoy around 15 to 20 titles from launch. The only ones confirmed for launch in the UK are Zelda, Red Steel, Need for Speed: Carbon, Tony Hawk's Downhill Jam and Super Monkey Ball Banana Blitz. Even without the other ten titles that' a pretty good spread of games and enough to keep me interested. Frankly, I can live without World Series Poker. Although, I was disappointed to see that Mario Galaxy isn't a launch title. In addition, Elebits is only confirmed in the US and I'm slightly anxious that its quirkiness means it'll be a while before we see it in the UK.

Nintendo also aims to increase its appeal to women. Already, miles ahead of the pack, when it comes to engaging women, Ninty has announced definite plans to target non-gamers, including elderly women and mothers. Company president, Satoru Iwata likened the challenge to selling "cosmetics to men" and claims, "We want to appeal to mothers who don't want consoles in their living rooms, and to elderly and to young women."

It's a tough nut to crack, but if they succeed, Nintendo is well aware that it could make the Wii one of the most popular consoles of all time. This is an exciting prospect and could be a real gaming revolution, but let's not count our chickens. Although, ten out of ten for effort to Nintendo for actually trying.

It has to be said, out of all the console manufacturers, Microsoft is the one that needs to sit up and take more notice of the untapped market that women represent. It could also learn a few lessons from Nintendo.

The runaway success of Nintendogs and Dr Kawashima's Brain Training on the DS shows that it can be done and Nintendo intend to repeat this success with the Wii. Nintendo is now firmly placed in the hearts and minds of women and other non-gamers, including the elderly, which is an enviable position Sony and Microsoft would give their right arms for. And with Sony out of the picture in Europe until March, the Wii could find itself a firm foothold in the biggest area of growth in the games market.

All in all it's good news from Nintendo and I'm looking forward to putting my pre-order in, if only to secure myself some game time with Link and his horse-riding, sword swinging adventuring. The fact that Wii games are going to come in at under Â£40 is another blessing, especially seeing as Microsoft are really pushing gamers to their limit when it comes to the price of games. Â£50 for a game is really asking too much. I mean I could get a docking station for my iPod for that, or dinner for two at a nice restaurant, or book a flight to Paris or Vienna for the same!

I think somebody's had a word in Microsoft's ear because the latest is that the 360 is already getting its own platinum range. This means that early titles like PDZ are now going for Â£19.99. I could probably get a return train ticket to Brighton for that, which is much more reasonable exchange rate.

With all the pre-launch bitching and squabbling out of the way, Wii (do you see what I did there) can all get back to the business of gaming. And of course, enduring the next two months worth of Wii-based puns in gaming headlines. I mean, how bad can they get?

Most wanted: My Own Unicorn in Oblivion