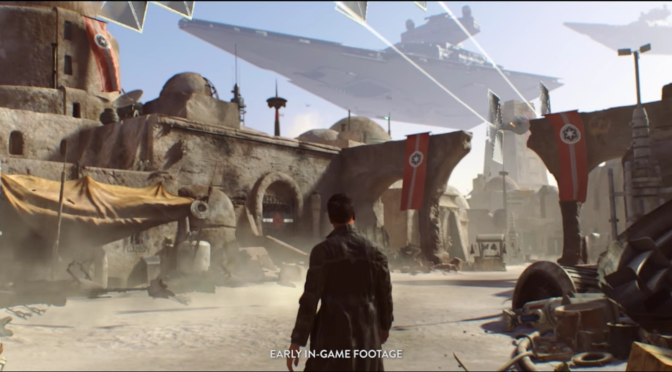 There was one game that I was really looking forward to and that was Amy Hennig’s Star Wars  title.Unfortunately, this is a Star Wars project we will never see, as EA announced the closure of Visceral Games, the studio behind the game.

Of course, the first thing we need to acknowledge is that people have lost their jobs as a result of this closure, which is always sad. Although EA will try to shift people into different teams, it’s inevitable that some will be forced to look for work elsewhere and we wish them luck.

We knew next to nothing about Visceral’s Star Wars game, but with Hennig writing and Jade Raymond as producer, it had a pedigree of talent that I could get behind. Hennig straight from the success of the Uncharted games at Naughty Dog and Raymond’s Ubisoft studio, which built the neverending Assassin’s Creed saga. It all looked good, but the market changed under their feet.

Whilst the news is shocking, the statement from EA’s executive vice president Patrick Soderlund offers some insight into the business decision behind it.

He said of the game:

“In its current form, it was shaping up to be a story-based, linear adventure game. Throughout the development process, we have been testing the game concept with players, listening to the feedback about what and how they want to play, and closely tracking fundamental shifts in the marketplace. It has become clear that to deliver an experience that players will want to come back to and enjoy for a long time to come, we needed to pivot the design.”

The conclusion is, linear, story-based adventure game is out and we can only suppose that multi-player game with microtransactions is in. In EA’s defense, if you want to make money it is the way to go, but that’s no consolation for those of us who love a cinematic, solo-player experience with good writing and thought we were going to get exactly that, but in Star Wars. Urgh. It hurts.

Some commentators are saying the writing’s been on the wall for a while. The last two years’ big single-player extravaganzas have all disappointed, in terms of sales. Dishonored 2, Deus Ex: Mankind Divided, Watchdogs 2 and Prey all fell short of expectations.

In contrast, Uncharted: Lost Legacy and Horizon Zero Dawn were big hits, as was Hellblade, but they are the exception, rather than the rule.  Even Uncharted features a multi-player option these days and Red Dead Redemption 2 also promises an online multi-player experience. Not only does this suggest that the one-play, linear adventure is on the way out, but the openworld experience that once ruled the gaming roost is also required to ‘pivot’.

The headlines have been particularly bleak, with many forecasting the end of the singleplayer game and linear storytelling. I’m not sure they’ll ever disappear completely, but maybe they’ll be packaged into more lucrative, multi-player experiences. Despite EA’s misgivings about the Hennig project, the publisher has announced a single-player experience for Star Wars Battlefront 2, after players voiced concerns.

In the high-definition generation, the budgets for single-player narrative adventures are escalating, but the price of games is fairly static. These lush, cinematic experiences are expensive to make, but without a robust multiplayer element and opportunity for DLC, publishers struggle to justify the risk. EA took a hit this year when Mass Effect: Andromeda disappointed and then the series was put on ice. Perhaps the next Mass Effect will be closer to Overwatch than anything BioWare have delivered before.

My main concern with the packaging of single-player into multi-player games is those experiences tend to focus on shooting each other.  I know Uncharted games have a very high bodycount, but the real reward is the story and the characters and the gorgeousness of it all.

I think it’s ironic that in the same week, BAFTA has announced a Game Beyond Entertainment category for games that engender empathy. The category will be part of the 2018 awards and is described as recognising games that ‘raise awareness through empathy and emotional impact, to engage with real world problems, or to make the world a better place’. The category will look at a game’s ’emotional impact, thematic fit and innovative use of the medium to explore and deliver impactful messages’.

In my experience, that’s the opposite of what multi-player shooting matches want to do. So, this week we see an ever-growing gulf between games as art and games as business. Whilst BAFTA is rewarding empathy and ultimately storytelling, the big business side of the industry is trying to find a way to do story as part of a bundled experience that focuses on gameplay and monetisation first.

It’s also worth noting that this week’s casualty is a game helmed by two women. The only hope I have is that indies, particularly the  ‘AAA indies’ like Ninja Theory step into the gap left by the big studios. Like I said in my earlier column, shorter games maybe the way forward for the intense, cinematic single-player experience. They are cheaper to make and deliver a rich experience without the filler demanded of a 60 hour openworld marathon.

Of course, the thing I hope for most of all is that lost Star Wars game we all dreamed of becomes a reality, you know, when linear storytelling in games has a big renaissance.