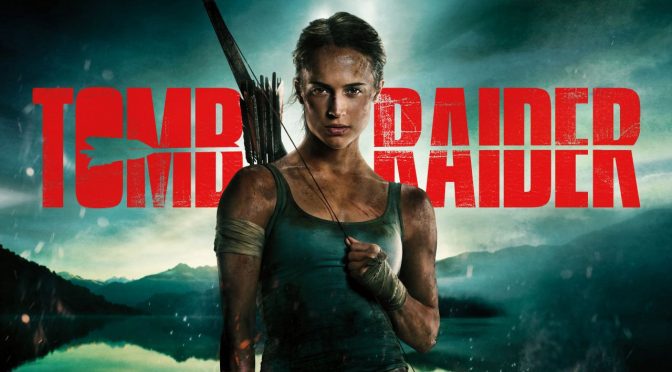 Lara Croft is like the David Bowie of video game characters; she seems to reinvent herself for every generation. From her 1996 beginnings as the busty Indiana Jones and her debut on the big screen, with Angelina Jolie in the noughties, to the 2013 reboot, with a new, younger, less sexualised Lara, she’s had an everlasting appeal, despite a few missteps. The latest in Tomb Raider film stars Alicia Vikander, of The Danish Girl fame, and I have to say, it could be the best game to film. The video game to film bar isn’t a high one, to be fair, but still, this outing is competent and enjoyable enough.

Simply titled, ‘Tomb Raider’, the movie borrows heavily from the rebooted game of the same. Vikander plays the new style Lara, who is younger than Jolie’s version and more streamlined in the chest department. Just as in the game, the skimpy shorts have been replaced with more practical trousers, although she’s swapped her sturdy boots for some with a slightly ludicrous high, block heel, but you can’t have everything.

The general premise of the film will be familiar to anyone who played the game. Lara’s father is missing, presumed dead, after he left for a Japanese island seven years ago. Although, Lara refuses to give up on him and turns her back on her fortune and refusing to sign the inheritance papers.

This is where the film strays from the game because Lara is no longer the aristocratic, aloof character gamers have come to love. When the film starts she’s a bicycle courier living it down on the streets of London. Keeping it real and relatable for ‘generation rent’ I suppose. But she is living in Shoreditch, which even hipsters can’t afford anymore, so not that relatable, especially when she does decide to pick up that fat inheritance after all.

Lara’s father leaves her a rather rudimentary puzzle, which leads her to maps and a notebook detailing where he was going and what he was looking for. Handily, he also leaves a video instructing her to destroy all these things because he must be dead and end of the world type things will happen if bad people get the notes. Of course she ignores his instructions and sets out to find him.

Scenes with Lara’s father are told in boring and repetitive flashbacks, where he kisses her goodbye and gives her a lasting memento of her already dead mother, in the form of a jade pendant. This pendant, the last remaining item given to her by her father to remind of her mother is pawned by Lara in the blink of an eye. She doesn’t think twice and that’s just how much Lara’s mother matters in this film (and the games); not at all. She is dispensable, in favour of the softly smiling father who just leaves her all the time.

So we fly to Hong Kong, where Lara meets Lu Ren (Daniel Wu), who replaces the four buddies on the island in the game. He’s one of my favourite parts of the film, but he’s woefully side-lined and doesn’t do much except hatch a really bad escape plan, get caught and then guard the door, when she enters the tomb.

Lu Ren looked like he was going to bring some levity and heart to the proceedings, which are a bit joyless. Vikander’s Lara doesn’t have the archness of Jolie’s; she’s just a bit boring and earnest. To make things worse, when there were some one-liners, none of the jokes landed, making the whole thing a bit awkward at times.

As in the game, the McGuffin for the story is the ancient Japanese death goddess, Himiko. If she’s awoken, she’ll end the world or something. But the film decides she’s not actually supernatural and it’s just an ancient virus, which acts so quickly that it may as well be magic. In fact, for a film set in Japan, the only Japanese people (I’m assuming some of them are Japanese) are slaves without any dialogue, who have been brought to the island by the Mathias, the white villain of the piece.

As negative as all that sounds, there were bits that I enjoyed. The bike chase through London was great, but totally surplus to narrative requirements and actually slowed the whole thing down. But it was exciting and well shot and London looked beautiful, so there’s that.

I did enjoy the brief sojourn in Hong Kong, even if the whole street urchin sequence fell on old cultural stereotypes. Things looked up when Lu Ren entered the scene and the beginnings of a buddy movie looked on the cards, only to be snatched from us.

Overall, the film was competent, which is more than can be said for the average game adaptation. Unlike the Jolie films, there were no shower scenes or skimpy outfits, so the male gaze was, thankfully, dialled down. The directing was good, with a good cast, including Derek Jacobi and Kristin Scott Thomas, who were just there to look sinister and pick up a fat pay cheque. Alicia Vikander was a ripped, believably capable, if overly serious Lara Croft. However, Lara’s obsession with her father and complete disregard for her mother is really off-putting, especially as he’s not that interesting. The film did leave it open for a sequel, but I’m hoping they have a better story to tell next time.