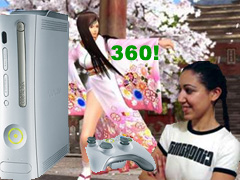 First it was going to be white, then silver. It had hard-drive, then no hard-drive. The true shape and contents of Xbox 2 has been driving the industry into a frenzy of hearsay, rumour mongering and tall tales. And now, finally MTV has aired the world unveiling of everyone's favourite box.

We can finally confirm that the next gen Microsoft machine is called Xbox 360. Something we'll all have to get used to, but I guess it's better than XB2.

The 360 is going to have a 2005 release, probably November for the USA with Japan and Europe following closely behind. And we'll have between ten and 16 games to choose from at launch.

The net has been churning out various images pertaining to be the 360 and the most recent ones have in fact been genuine.

The new machine has shrugged off its black, built like a brick out-building proportions. Instead we get something more akin to a laptop or DVD player. Enter stage left, the new, slim line, silver Xbox 360. It is a dual concave design, giving the 360 an almost hourglass figure. And at last Microsoft has realised that size isn't everything. The 360 is reportedly the size of a PS2 – the old one, not the new slinky one.

As rumours have indicated, the controllers are wireless so start stocking up on batteries. Bearing a close resemblance to the S controller in terms of size, the new controllers promise to be more comfortable and less bulky. But the real feature is a 360 button in the centre of the pad. This is the Xbox Guide Button – a hot button connecting gamers to their games, friends and music on the 360's central hub ‘The Guide.'

There is so much to the 360 that the mind does quite literally boggle. Okay, here goes with just some of what you can expect from the big X. You can create gamer profiles and avatars to personalise the whole experience. You can also create a list of players you like to play with. A matchmaking feature means it's easier to find like-minded, like-experienced gamers so you can get down to the nitty gritty of playing that much sooner.

There are two Live package options; Silver and Gold. Silver provides a free level of Xbox Live, including access to the Marketplace for downloading new game content. Silver and gold will also feature text and voice messaging as well as live voice chat. But you'll have to go for Gold if you want to play online and then the real fun can begin. Even when you're in-game or watching a movie, friends can chat and challenge you to a game.

A video camera can be bought as an optional extra, allowing you to see your chums in the corner of the screen as you play. For the ego-maniacs amongst us you can actually put your photo on the face of characters in the game. So, blissful anonymity could become a thing of the past.

Watching a video promotion from the Xbox team confirmed that the Xbox casing will be customisable. Yes, much like a mobile phone, the whole front panel comes off, allowing you to replace it with your heart's desire. Expect to be able to buy limited edition panels featuring the DOA girls lying in various states of undress. I know that excites you so I'll give you a moment with your thoughts.

Remember ‘connectivity', the buzzword of 2001? Well the 360 is actually realising that industry vision. According to recent revelations all MP3 players, digital cameras and Windows XP PCs can be connect via the 360 Wireless Network Adapter. Woo hoo, at last someone's realised the future is wireless. And we can all fiddle with music, photos and 360 degrees of fun.

I'm also feeling the fact that DVD playback is now imbedded into the system (no need for add on bits and bobs) and it comes with a universal remote. Thank the maker that I can start putting some of my remotes in a drawer.

When it comes to what's inside the machine, well I could give you the full spec, but here are the best bits. The 360 boasts one teraflop of system floating point performance, a three-core PowerPC-based CPU, a custom designed ATI graphics processor. And more than 512 megabytes of memory just for visuals – so it's going to be pretty, dear play chums, and that's what we like to hear.

As is only to be expected, this has opened the floodgates to various publishers announcing their loyalty to the big X. The most exciting sneaky peak for me was seeing DOA4 pics. Always setting the standard for next gen graphics DOA4 is continuing a grand tradition. It looks effing gorgeous. Put a cushion under your jaw because it will drop. And yes, I am fully, fully excited.

Of course team Xbox have secured a gaggle (or is it a flock?) of Japanese gaming luminaries to try and woo their fellow countrymen. Developers Hironobu Sakaguchi, Tetsuya Mizuguchi and Yoshiki Okamoto are on board, joining the likes of Bioware, Bungie and Rare. Other publishers include Sega, Ubi Soft, EA, THQ and most notably Rockstar, who are definitely going to be one to watch.

But before we found out the truth behind the box the Internet and the industry at large was flooded with rumours. I hardly had time to do anything other than update myself on the latest Xbox 2 gossip. And here are some of the best:

Xbox 2 is called Xenon – true for a while

And the latest rumour is that Sony is moving the launch of PS3 from 2006 to 2005 to cut Microsoft off at the pass – probably not but who knows.

Almost none of the above mentioned rumours are true; it's all part of Microsoft's marketing strategy to keep us talking and steal the limelight from Sony.

Thankfully the wall of secrecy is coming down and we are now the enlightened masses. Although, I have to say the rumour-mill served us very well this time around because most of these turned out to be true. I guess Xbox employees just can't keep their traps shut.

All in all, it is now time to be officially excited. Of course the GiN team are going to be in the thick of it at E3 this week, so keep reading and we'll bring you the latest revelations from the show floor.