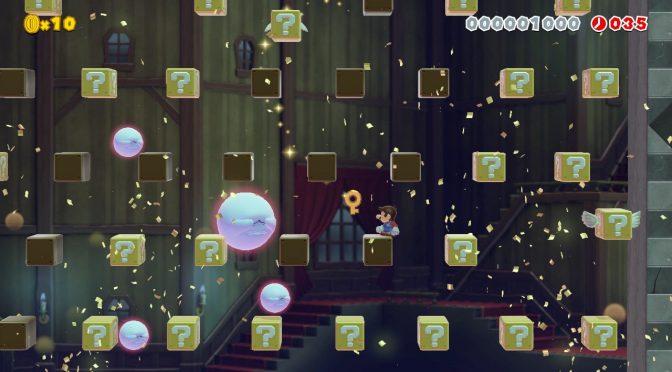 Even if you were to limit yourself to using only one game type, one course theme, and one tile type (say, for example, the iconic Question Block), you could create more unique Super Mario Maker 2 levels than there are atoms in the universe.

If that sounds implausible, we can prove it with a quick back-of-a-napkin calculation (be sure to orientate it correctly – doing maths on the front of a napkin is a severe faux pas and may get your club membership revoked). Imagine that a Mario level only consisted of one tile. Under the above restrictions, there would be two possible levels – one with a question block in it, and one without. Two options, one tile – 21. If we increase our level size to two tiles, we get four possible combinations – two possibilities for the first tile, and two for the second. 2×2 = 22 = 4. Add a third tile, we get 2x2x2 possible unique combinations, or 23, or 8. The pattern continues – 24 unique arrangements with four tiles, 25 with five, and so on.

A maximum-size “simple” Mario Maker 2 level is 27 blocks high and 240 blocks wide, so 6480 blocks total. There are therefore 26480 possible unique Mario levels, plus or minus a few possibilities (you’ve got to stick Mario in there somewhere as well, for example). For those of you who remember your standard form, this works out at about 4.7×101950 levels. For comparison, it’s estimated that there are only about 1×1080 atoms in the known universe – a frankly piddling number.

So not only have you got more options than there are atoms in our universe, but in many universes. You could assign unique levels to every single atom in a sescentillion universes – a number so bafflingly large that you’ve never heard of it before, and never will again. No wonder I spend all my time in Create mode staring helplessly at a blank screen. I’ve got choice paralysis on a multi-macrocosmic scale.

Functionally endless content isn’t particularly new to games. By now you’ve most likely at least heard of 1980’s Rogue, the procedurally generated dungeon crawler that, while not the first of its kind, named the rogue-like genre. The idea of feeding random seed numbers into fixed rule-sets to generate unlimited new levels turned out to be a fantastic way to create games with enormous longevity. Similar games like Nethack and Ancient Domains of Mystery maintain communities and active development to this day. The indie boom of the late 2000s saw many devs take these concepts and apply them to new genres, spawning the roguelike-like. Derek Yu’s Spelunky brought procedural generation to Mario-like platforming, followed by games like space-RTS FTL: Faster than Light and top-down Zelda/Smash-TV mashup The Binding of Isaac. The trend continues, with the recently-released Void Bastards bringing a roguelike flavour to a System Shock-type immersive sim. Whatever game genre you’re into, nowadays there’s an automatic level generator just for you.

Recently, however, we’ve seen a few high-profile games follow a different route for developing potentially endless play. Rather than leave the level generation to computers, Super Mario Maker 2 and MediaMolecule’s early-access game creation engine Dreams provide the players themselves with the tools to quickly and seamlessly fabricate and publish their own content. And those players have been prolifically doing so – the “New Courses” tab in Mario Maker’s Course World has been continuously updating every few seconds since launch. Nintendo hasn’t commented on how many levels have been made just yet, but the original Mario Maker boasted more than seven million courses after less than a year. It remains to be seen whether Mario Maker 2 will match this record, but given the massive popularity of the Switch compared to the underperforming WiiU, it seems like a pretty safe bet. We may not see multiple universes full of Mario content, but seven million minute-long Mario levels will keep you comfortably stomping Goombas for at least a decade. Longer if you factor in tea breaks.

Of course, anyone who’s spent a lot of time with Mario Maker 2’s Course World can tell you the main drawback of having such vast amounts of player-made levels available: a significant proportion of them are just… well, you know, not very good. Once you’ve travelled beyond the Popular Courses tab, you’re in uncharted waters, and it’s much easier and quicker to make and upload a bad course than a good one. The randomised Endless Mode is fun to dip into, but you’ll end up playing a lot of eye-rolling levels. On the other side of the coin, I’ve sunk hundreds of hours into Spelunky, and the level generator still seems to present an interesting challenge every time. That’s probably down to Derek Yu’s clever creation algorithms (discussed in his excellent book about the game’s development). Or maybe computers are just better at this stuff than we are.

Either way, if you need me, I’m gonna spend my weekend ploughing through Endless Mode. I’ve gotten about seventy levels in, so far. Only about 4.7×101950 to go.