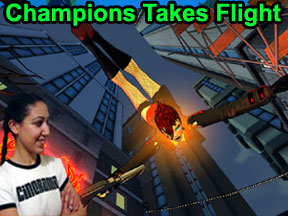 I've been looking forward to donning my cape again for some years now. Having left City of Heroes and Villains, I was in need of some new super hero action and Champions Online promised to fill that gap. Most of the summer I've been dabbling in the Beta and the onset of Autumn means I'll have time to sign up and login to the full game.

In many ways Cryptic Studios hasn't disappointed with it's latest outing. However, as the creators of CoH and V, the comparisons are inevitable and somehow Champions doesn't quite match up, despite presenting some innovative and exciting new features.

Character generation was the jewel in CoH's crown and true to form, Cryptic has created a customization system that leaves you truly spoilt for choice. Bodies can be tweaked in the usual, height, weight, bulk-type ways, but new to the table is stance. Players can choose how their character stands and moves, from Normal, through Heroic to Beast, which has you loping on all fours.

When you're a supe it's all in the costume and Champions doesn't let you down here. In fact I was paralyzed with indecision. Do I go for beast head with cyborg arm or pale and interesting with flaming eyes? Try hitting the random button for some surprisingly cool looking characters, as opposed to the usual fatal accident in a costume shop. The choices are endless and you'd have to be truly unlucky to meet your doppelganger once entering the game world.

Of course Cryptic couldn't use the same perfect system they created for CoH, but sadly, the replacement just isn't as intuitive. The UI is a little convoluted and has been changed, understandably, for the sake it, rather than because it needed fixing. I found myself frustrated as I clicked through options trying to find a way to have the gloves I wanted in THAT color, but with THAT trim or texture – easier said than done with the new system. But that is a mere niggle, when faced with a wealth of character options.

When it comes to powers, Champions doesn't involve archetypes, instead any character can choose any power pool, which offers more freedom than most MMOs. However, first you must choose your origin, which determines your stats for the usual constitution and endurance, plus a few new ones including ego and presence. Clicking on the origins, I found them heavily weighted in one area. So think muscle-bound thicky or weak braniac and not much in between, making it difficult to make an informed decision.

Customisation goes yet further, allowing players to choose the color of their powers and their location. That is, whether they shoot from eyes, chest, weapon or hand. Now that's detail!

Once in the world though, it all look s a bit CoH-esque – police cars, sky scrapers and statues of heroes. But it's not long until Champions breathes its own breath of fresh air. There's a lot more going on in Millennium City, than there ever was in Paragon. There are more random battles, with aliens beaming down around you and police rushing into an area to quash the uprising. On your way to missions, NPCs run up to you asking for help, presenting a lot more mini missions than the early days of CoH ever did.

On completing the tutorial, you run blinking into the sunlight to be greeted by a military parade in your honor and applause from the Mayor and a group of happy civilians. Then it's time to level up – that's choose a travel power and head out to the world proper.

There are some new travel powers, including a Spider-man style swing and tunneling, which I haven't seen in action. However, super jump (the king of travel powers in CoH) is a travesty. It's neither as elegant in the animation stakes, or as subtle and easy to control – gah! Hopefully, this has been tweaked for the final release.

The missions, as far as I experienced, were of the usual go there, get X or kill 10 of Y, but the foes and environments were more varied than CoH. Let's put it this way, I didn't go inside one warehouse or open a single crate.

With just a scant look on the Beta, I'm looking forward to jacking into the world of Champions proper and giving it some serious attention. I have to say, my immediate reaction was it's not as good as CoH, but I've yet to get to level 25 when I can create my Nemesis. Until that moment, I'm sure the jury will have to be out on Champions. All MMOs need a little bit of settling in time and I'm happy to give Cryptic the benefit of the doubt, after all, how wrong can the creators of CoH go?