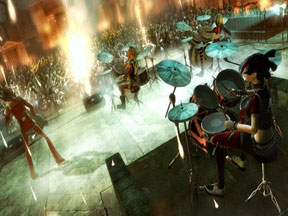 The latest edition to the Guitar Hero family is the best one to date. Too many times friends at my house called "shotgun" on certain instruments, other then the microphone, which I was always handed.

On a side note, I sang with a different mic this time. I used a 3.5 to 2.5 adapter and plugged in my iPhone headset to a controller to belt out the songs. I gave it a try after my double A batteries died in my wireless mic and I couldn’t find new ones readily available.

I was pleasantly surprised at how well it worked. One of the very nice new features of GH 5 is that it allows one to four players on the same instrument locally. Not that I would personally want four drums kits in my house, but I do have the guitars to accommodate the "I only want to play lead" people.

This is one of the many changes Neversoft made to Guitar Hero 5. The first one you will notice is when you put the game disk in your system. A song from the game starts playing and you have the option to turn on an instrument and immediately begin to play. This is the party play mode that we saw the crew demo at E3 this year and yes it works as easy as they showed. A button press allows you to join in, drop out, and change your difficulty. Thankfully you can skip songs in party play mode because every song on the set list is not liked by everyone.

I had a discussion with my fellow Gamer Geeks co-host about the set list for Guitar Hero 5 and I was familiar with 67 of the 85 songs. The songs are a wide variety from southern rock, punk, alternative, and metal to name a few genres. I was delighted that some of my favorite artists made the cut like Tom Petty, The White Stripes, Wolfmother, A Perfect Circle, and Stevie Wonder. The Peter Frampton track "Do you feel like we do" is a 14 minute live version from 1976 and the only true way to experience Frampton is live!

Career mode is less cumbersome, in that you no longer have to complete it in each difficulty to get those achievements. I switched from singing on hard to playing guitar and drums on medium without having to back all the way out to the main screen. I really liked that I got to choose what instrument I wanted to use to play the song and also I could skip the songs I’m just not into, like Johnny Cash’s "Ring of Fire." I earned stars to unlock new venues working my way through career mode to beat the game.

The log on screen is a hub that allows you to really customize your playing experience. You can choose your instrument, difficulty, character, if you want to play career or competitive, and find more players all while staying in the central hub. If you spent Microsoft Points on avatar clothing then you can admire your purchases while you play by selecting your avatar as your character. Character creation is still there and unlockable characters too.

I have experience in dealing with the one friend who exaggerates his skill on an instrument and ruins the moment for the rest of the players. One of the new features helps this case by allowing you to bring back failed players by simply playing well. Burning notes lead into band moments as long as you play the sections on fire and this gives you bonus points. Just don’t give too much grief to the member that may fail to kick in those moments.

Another new feature is how star power is handled. Each player has their own meter and if one player is hitting all the star power areas and their meter is filled to the brim then the excess isn’t wasted but goes into the other band members whose meters aren’t filled. The number of songs on disk is 85, but a free download allows your DLC from World Tour to be added and for 280 Microsoft Points you can import 35 of the World Tour songs on disk and Smash Hits will have 21 of its songs able to be imported. We are not able to choose which songs we want to bring over from those games.

Get ready for the challenges. Each gig has special bonus challenges with the required instruments to do so, for instance bass up strum only. RockFest mode allows players to test their skills against others, four player local or up to eight players online.

There are six different types: Momentum where songs increase or decrease in difficulty based on player performance, Perfectionist will reward players with the highest percentage at each section of the song, Elimination where if you screw up, you get the boot and the last one standing wins and Do-or-Die temporarily knocks out players who missed three or more notes in each section. Streakers awards players for those precious note streaks in multiples of 10. Pro Face Off is a familiar one with the head to head battle.

Everyone who enjoyed hitting the studio to create their own songs will enjoy the new features in GH Studio and GH Tunes. There are more samples, improved editing tools, and more mix patterns. This update allows for longer songs and is so much easier to navigate. I was amazed at how much Guitar Hero has changed for the good with this new edition. It will stay in my collection of games as a favorite for a long time!

And this was the first time a Guitar Hero game was played in my house without the argument of who was going to play lead.