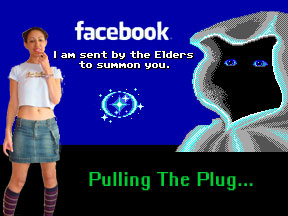 While the rest of the industry headed to the new E3, also known as Leipzig Games Convention, I joined a revolution. Not quite a revolution, more got hauled onto a bandwagon kicking and screaming by pestering friends. Facebook is the new MySpace, which was the new MSN, which replaced passing notes in class. Yes, I've been sucked in and signed up to Facebook.

It happened slowly, creeping like an insidious gas. One day a friend invited me to Facebook and then another and another. I'd never heard of it and certainly couldn't be arsed to sign up to any more online thingemy-bobs. I mean, I've got my organic veggie box account, my online banking, two emails, my art community account and then there's the MMOGs I may be signed up to at any one time. All in all I'm pretty much signed, sealed and delivered when it comes to joining online stuff.

"But you can share photos on it," they protested.

I can do that on my Kodak gallery thanks.

"You can send messages," they bleated.

Er, that's what emails and texts are for.

"But it's my wedding and I want all the people coming to my hen do to meet up before you all come over to Turkey."

Well, okay, but only because you've got a valid reason, and I still don't see why we can't just have an MSN conversation like normal people.

And so it was dear play chums that I signed up to Facebook. No sooner had I signed up than friends became my FB friends and sent me this that and the other. I found old friends from university and friends from my old creative writing course, which was all lovely. But then old boyfriends started popping up and my junk mail box was spammed full of "so and so's written on your FB wall, to see what they've written click here" or "so and so's sent you a kitten, to play with your kitten or send them a baboon click here."

So I dutifully clicked and then my Internet provider couldn't find it and all my friends think I'm ignoring their FB loveliness. Aaargh!

I can't help thinking that if people just got a copy of Animal Crossing they'd have way more fun and still be able to send each other silly gifts and design clothes. Plus they'd be able to go fishing together under the moonlight and there's no better way to bond frankly.

People like socialising online and that's great, but frankly I'd rather just get an email. As opposed to getting an email telling me that one of my friends has sent me a message. It's all a bit like hard work if you ask me and not that much fun.

Why don't these people just find an MMOG they like, form a Super Group or Guild and hang out properly. It would be much more fun and you'd have more to talk about. I mean once you catch up and tell people that work sucked, there's not much left to say.

I was proud of not having a MySpace and I stayed firm when people invited me to FB, but now I've relented and I'm already regretting it. And the worst thing is, the server's always down so I can't even delete my frigging account.

It's all very lovely staying in touch with these people, but I don't have time to write on their wall or send them a virtual martini. And then there's the random people that you worked with like five years ago who want to be in your friends list and I'm like, "I haven't talked to you for years and now we're friends?"

So I'm an online networking Luddite and with good reason. Everyone's on bloody Facebook, which is a good enough reason not to be. What's wrong with MSN? It's quicker and takes less upkeep; in fact I've had gardens that need less tending than Facebook.

Maybe you'll find me on FB, but for the love of god don't forget to graffiti my wall or send me an iced bun or some such nonsense. And I'll be sure to do exactly nothing as I struggle to even sign on and get through my backlog of virtual flotsam and jetsam.